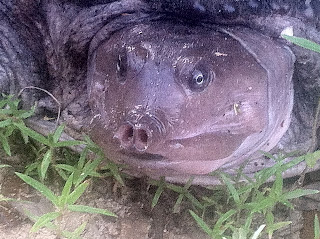 I don’t know Calipash from Calipee, but we ran into this soft-shelled turtle up on the banks of Lake Lafayette on Sunday morning.  It was three feet across at the shoulders, and she croaked out a tune that sounded like Wayfaring Stranger, but I can’t be certain of that.  The air was so wet the poor girl probably thought we were in her lake and not she on the land.

We visited with her long enough for one fellow to pull the plug of white pine out of his seat tube and whittle it down some more, having broken his seat bolt within minutes of starting the ride.  Now, for myself, a broken seat bolt is a God-given first-class ticket to the couch on a steamy North Florida morning.  Such a catastrophic mechanical is a guilt-free reason to bump down the A.C. and watch Elle Woods win over the curmudgeonly brunette and triumph in spite of, and with the aid of, gender stereotyping.  A broken seat bolt?  Why it might take until October to fix such a thing!

Instead, we were treated to a first-class trail save the likes of which I have never seen.  I have packed ripped tires full of pine needles, trued wheels with force against trees, converted more bikes to single speed than are worth counting, and wrapped more dollar bills under sidewall tears than George Washington, but I had never seen this particular solution of plugging the seat tube to hold up a seat post.

it’s getting a little techie in here, and I apologize to my friends who prefer to knit potholders, or devise a cooling system for a 1965 Shasta trailer, but I am talking about American Ingenuity damn it all.  It saved us from the Nazis, and it brought us the 37 flavor serve yourself yogurt bar so you would do well to endure the minutiae and appreciate a man who carries a pocket knife and knows how to use it.

So by the time Joey had risked losing a finger to this old girl, JB was back in the saddle and ready to roll.  1992 steel frame, rigid fork,  and cantilever brakes surrounded by full suspension, carbon fiber, and 29 ” tubeless tires.

Only a bad carpenter blames his tools.  If you want it, find a way. 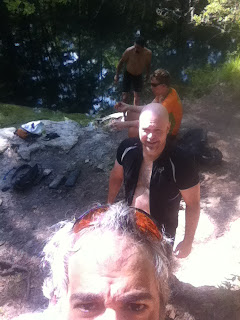 A dead Canadian goose moulders against the curb on my way to work.  I noticed it freshly killed last week and today it is almost gone, dismantled and rendered for  carrion.  So sad to see it last week with soft brown feathers fluttering in the wind of annoyed traffic revving to make the light.  I wonder who hit it and how they felt, and if they cared.  Did it ruin their day? Did it cause them to reel in momentary horror, like seeing your fingernail pulled back, un-moored from the quick and fleshy before bleeding?

We rode across the forest on Saturday, early but not early enough, out to the sinkholes.  There’s been no rain for days and days so the water was settled and calm, clear and cold.  Nobody was there, and we fell into the cold water one at a time, and told stories of Darin jumping from the top of the tree and collapsing a lung, and how Germans appreciate it when you speak English with a cartoonish German accent.

We lingered as long as we could, postponing the stifling march back across the forest, battling gravity, the sun, the sand, ignoring the folly of two and a half hours in the saddle for a twenty minute swim.

I got woozy, dizzy, and wondered what happens when you really can’t turn another pedal and you are somewhere in the woods without a cold coke in sight.  I spoke up.  I gave notice.  I got help in the form of a salt capsule.  A pittance, I thought.  A kindness, a final communion, a placebo, but no solution.  It made all the difference. 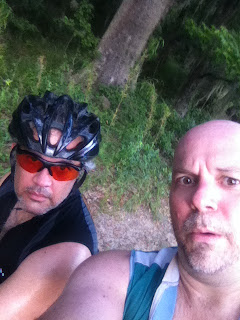 The look on my face should say it all.  The heat was so intense when I walked out of the house at 8:00 O’Clock in the morning it felt like someone whacked me in the ear with a switch.  Now, 8 hours and 18 degrees (99) later it was time to go for a bike ride.

Why?  Because– that’s why.  There are people who own bikes.  There are people who are cyclists, then there are riders.  Riders ride.  Besides, after being released from my air-conditioned cell I craved the suffering. I needed the immediate and all-consuming presence of effort to blot out the day’s tedium and confining press of the Dockers asking me, “Don’t you think it’s time to go up a size?”

So out into the streets and woods we rolled, Joey and I, posing for this shot while we played cat and mouse with a questionable vehicle in a questionable location.  I spared you the midriff, which feels more like a mostriff, and the plunging neckline of my sleeveless gown.

The air smelled like burnt toast, and when we stopped to address a flat, the sweat ran unbroken from the gutter under my helmet.

I like these summer rides for one thing.  They prove I am meant to be in this saddle.

Every person only gets so much steam.  It is up to each of us to decide how to use it or let it leak out of its own accord.

No pictures, just words.  Steady rain knocking fat magnolia blossoms onto the sidewalk like fried eggs slipping onto the Waffle House floor.  The smell of them so sweet it is pornographic and I blush just driving over them in the road.

A bike ride last night 20 years overdue with Joey B and an old friend who ate potato soup on a cold day while carving out the first mountain bike trail in Tallahassee that I ever knew of, sweet Grandma Munson.  Maybe it was potato soup, or maybe said he built a chicken coop, his pink bike spinning so fast I heard nothing but wind.

A fresh clean burn on the forest, setting the crest of Woodpeckers off in contrast with the matte black floor of the burned pine needles, green shoots of grass already reaching up over pedals. Long views through the missing underbrush, blueberries hidden off the trail not quite ready.

Just falling into each pedal stroke hoping to never hit the bottom, yarding the next one up around the 12 O’ clock and then hammering towards earth.  I can hear them back there, one wrong move and they will have me.  No wrong moves tonight though.  I’m all on the one and riffing on the breaks.

The way points north to Alabama tomorrow.  I’ll lay my head back and watch the sun shine down on the great south and loll away the miles while my girl pins it to the white line and cocks her foot up on the dash. 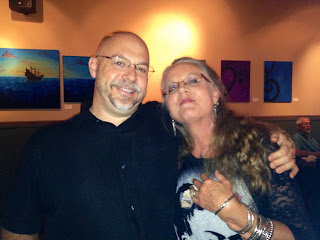 That title might be a bit hyperbolic, but I ran into Ms. Moon, of www.blessourhearts.blogspot.com Friday night.  Look at us out on the town.  Not bad for a woman who prefers the company of chickens and a misanthropic cyclist.  She was there with a whole mess of family, to watch her friends play some music.  I was there to apply for a dish-washing job.   I’m afraid I tanked the interview, but I aced the swimsuit competition.