In the 1980’s when I was emerging into my own sexuality,  I might greet a friend by calling him fag, like, “What’s up fag?” Which was enough to get you a frog on the arm and a return shot of “nothing fag.” This was just adolescent business as usual in central Florida and probably every other community in America.  Adolescent boys are nothing if not repugnant, ignorant, fetid assemblages of mucous and ill-intent.  In the complex rules of middle school, boys whom one was not friends with were not fags, but homos, as in, “What’s up homo?” followed by slapping whatever the homo might be holding in his arms to the floor in the hall- books, Trapper-keepers, cartons of half-drunk chocolate milk, pink Hostess coconut snowballs. This might result in retaliative homo-calling (I’m not the homo, you’re the homo), pretty standard and unoriginal stuff between dullard tweens.

And thus the days did pass.

By the 1990’s I was here in Tallahassee, enrolled in a University, and working at a restaurant known as a refuge of employment for gay and otherwise outcast members of society who were turned away from more traditional venues of employment, such as everywhere.  I remember the day I was hired, having spent dollars I could not afford on a cup of gazpacho served in an octagonal glass bowl that I slurped nervously watching the clock and wondering if I had been forgotten.  After the tomato had crusted to the bowl and I had drank much more coffee than recommended, the owner sat down with me, looked at my application stacked with pancake house and Chinese restaurant experience, and she hired me.  I worked there until I left town almost five years later.  Gay was normal at Food Glorious Food.  Normal and fiercely defended.  When I get nostalgic about my college years, it is never school I think of, but pulling all-nighters making pita chips for a wedding party of 300, and taking my orders from a smart and exacting lesbian who indulged us boys our buffoonery and chided us towards sophistication.

I learned from the owner of that place, and my friends there, that it was not enough to refrain from persecuting gay people, but that an active role in the advocacy of their rights and protection was a moral obligation, and that choosing not to do so was persecution itself.

By the year 2000, I was working in a place that housed teenagers in crisis. Homeless, angry, scared, defiant runaways who came in every form, including the old familiar stinky, lumpy, fuzz on their teeth adolescent boy form.  It turns out lots of kids end up in runaway shelters because they are gay, or to be more specific, gay, lesbian, transgendered, bisexual, intersex, two-spirit, and every other sub-category of not straight and conformed to gender stereotypes.

But now I’m getting preachy, which is so boring.

I learned to protect these kids from other kids, my own staff, and themselves. Some were bright and resilient, capable, intrepid believers in themselves.  Others spent their free time in their rooms scratching into their arms with safety pins, or trying to set themselves on fire with curling irons, which never worked and left an acrid burnt foil smell in the building for days.

I watched a young woman transcend her physical male body and become who she was in the confused and chaotic safety of our building.  For me it was a logistical issue, which bathroom can she use and who can be her roommate? For others it was an ideological war to stop her at all costs.

She ran away to New York days before she turned 18 and got help from this place.  Years later I met the woman who picked up where I left off, and we shared a cigarette outside a hotel in Portland, OR and hugged like proud parents.

Now I have friends who I still, after all I have learned,  think of as my gay friends, which means I am not done growing yet, but there is still hope for me, because they are gracious and understanding with me, and far too patient with all of us.

Bill told us about pulling a bonked rider through the forest by a stick. I said nothing, but kept wishing for that stick.
He said he liked what Bruce Lee (Lei?) said, that he hoped he never reached his peak, because there’s nowhere to go but down from there.
Larry mused about watching people get napalmed on TV in 1969, and how tennis lessons did not help ameliorate that.

The forest was lovely, dark, and deep
and I hung all the way to Fisher Creek.

We saw Mike M along the way, and I wished again that I could stay.
Instead I rode along in silence, glad to be there, in defiance-

of my legs, my lungs, and pollen
voice of weakness again has fallen.

Robert Frost deserves better, but I’m just trying to say thanks. It’s not every day you get a private audience with two of the most respected men in town on two wheels. I felt better at the end than I did at the beginning, which is all I needed to keep me coming back.

Let’s call it a poem because it has no direction, no meaning, no purpose some rhyme.
Just words on a page (but not a real page) anointed with feelings from time
that no one remembers, or hardly recalls– when life didn’t matter,
especially your life or mine.

Sadness prevailed and cowards were pussies and pussies were cowards alike,
Bombs fell on Baghdad and nobody asked me so I got drunk and I rode my bike.

Now I care more, (still nobody asks)
I ride bikes, but not like I did.

I ride them for pleasure (for glory! for pain!)
While others can’t ride now or walk, or eat breakfast, or kiss, make love, or sweat money-
or die a quick death like their friends.

The smart ones care nothing for the lives of others.
It’s a sucker’s bet once and for all,
The night bombs fell on Baghdad nobody asked me and so I did nothing at all.

This morning I saw a hawk, she was standing at a crosswalk, and I thought would she not rather fly?
But sometimes I sit here(not lifting a finger) as I’m watching the cars go by.

Phlegmatic and lazy, choleric and crazy? The reason it just matters none,
because hawks made of feathers say if they had their druthers, they’d be working on just having fun.

Tiny vintage trailers, broken transmissions, and the vile creeping crud that grabs us by the lungs and drags us down– it was a weekend of unexpected adversaries.

I got up early to ride on Saturday still suffering from the butter lung disease, but determined to ride it out of my system. I lurched over to the dogboy’s house straight of of the warmth of my berth in the lungers’wing. A lap around the neighborhood would have been a triumph, but every option dogboy mentioned seemed to involve crossing either the county line or a large body of water. I had not the legs to ride. I had not the lungs to ride. I had not the desire to ride. In spite of my deficits I had the one thing that matters more than all. I had the deep in the gut, sour spit taste, broken glass in the knees, fuck you and all the riders of the world combined by God will to ride.

I’m sure it was not too exciting for the dogboy, but he is a good friend and he adapted to the reality of the situation. We cut no corners and rode a hefty selection of single track, turf, mulch, sand, gutter, road and sidewalk across the east side of Tallahassee and there, in front of the hospital, a block from the end I put a foot down to wait for the sick dizzies to pass– then one slow rotation at a time, I cranked up hill to the waiting van and a hot toddy.

And it has always been such no? So many reason to not be who we wish to be, to not do what we must to become who we are. Call it what you want: Three chords and the truth, the X factor, chutzpah, balls, will, the only essential ingredient. 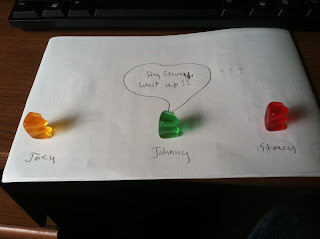 I knew it was coming. There is nothing worse than getting that message from your rivals friends about their awesome big miles, hardcore ride when you are eating a biscuit sandwich somewhere in Panama City Beach. Those boys, Mystery and Bushy, they unloaded on me from driveway to driveway. I like to think it took both of them, and their collective scheming effort to break me down, but the truth is I was in a desperate state minutes after we departed and it only hurt worse from there.

I didn’t get dropped or anything, it just hurt really bad to keep up.

What are you going to do though? When you sit in the castle forever, lording it up in the manor of champions, you get curious about what goes on down in the village at night and you slip away, not realizing you have locked yourself out of the kingdom, your keys lost somewhere like your dental floss and nasal spray.

At some point on the far-flung pine flats of the Twilight trail, Bushy deep in a trance of agony, me right on his wheel, he locked up the brakes to avoid a mirage of a Diamondback Rattlesnake. In a state of hypoxic delirium he feared the common exposed scrub oak root and caused me to take immediate action. I veered off the trail and laid the bike down softly in the forgiving sand, narrowly avoiding disaster. A quick pain inventory revealed no major injuries and we were back to rolling at my aerobic threshold seconds later. I felt a slight itch in my bibs, and attributed it to sand and pine needles and continued my death grip on Bushy’s wheel.

Only when I returned to the safety of the van, and the adrenalin faded did I assess the continued sting and itch to reveal a near invisible carpet of prickly pear spines embedded in my fatty sidemeat.

The insult, the injury, we have been here before no?