I’ve been trying to have this low-key, local vacation, which is why I’ve been absent from the Circus for a few days. I left you with a cliffhanger last week, which was King and Kong vs. Razorback.

Well folks, it is time for me to come clean. I have heard that the truth will set you free.

This is my little corner of the internet, and I could say just about anything I want about the experience, but the bottom line is this… Razorback was one scary motherfucker.

Oh, it all started out lovely enough. Two local buddies, ready to “give me the tour”, and a cool overcast afternoon. I expected some apprehension. I anticipated some pain. I assumed that I could handle it.

Well, you know what they say about those who assume.

I rolled up on the first big drop, called something like meatgrinder, and stopped. My two escorts rolled off the edge like paratroopers dropping on Normandy. All of a sudden it was quiet, and I was alone.

40 + feet of limestone mocked me as I slid down it on my soft little bottom. This ride was like walking unexpectedly into a redneck bar with your “Somewhere there is a village missing an idiot” t-shirt. I was going to have to fight my way out of this one…

Uh-oh, time to take Powder’s back-up rig to the Doctor, I’ll have to finish this later.

Thanks for sticking around-

The hardman is currently fighting a groundswell of popular opinion to rename him Bonnet boy in light of his recent diagnosis to STAY OUT OF THE GODDAMN SUN ALREADY!

The hardman is quite fair-skinned, like remember that movie Powder? The local bullies beat the shit out of this kid for being too white. What bullshit, tell me one place in Iowa farm country where you are in danger of being too white.

I don’t care how creamy the hardman’s pelt is as long as it keeps him off the bike a little longer.
It could be a touch of polio, rubella, or mad cow disease as far as I’m concerned, just keep that fucking Ellsworth locked up. As his skinny little legs continue to atrophy, I will be feeding King and Kong on turpentine and barb wire until they are pumped to a freakish level. Then, when Powder is ready, we can go for a friendly little ride, you know, to “Welcome him back”.

Sasquatch and the whole Sasquatch clan went to the Wildlife Refuge yesterday, but failed to find the fabled Pinhook river. As a ride destination, that river has remained as elusive as Shangri-La. On the return ride, S’quatch is claiming a blistering 14.5 mph pace. Apparently since he rode from south to north, it was slightly uphill the whole way. Good job S’quatch!

I’m off to the Magic Kingdom down in central Florida today– Santos (www.omba.com)
I’m bringing back Eminem who needs a break from NYC. Em was once a longbow rider of the range, but its been a long time. I guess we have to play “nice nice” to keep him interested.

This afternoon I will finally ride that slag heap they call Razorback as well. I’m really looking forward to getting my ass handed to me by my favorite “back to the land type” modern day pioneer, Pa Ingalls. All I’ve got to say is, “NOT THE FACE, DON’T HIT ME IN THE FACE!”

On King, on Kong!

Welcome to this amazing virtual experience Hitops, we’re glad to have you aboard. Um, do you think Choirboy will be joining us, because I might want to delete my picture, things could get ugly. Besides, I see him more as “Preacher of the End of Days” more than “choirboy” (they’re soft and cuddly right?)

I woke up Wednesday morning with a distinct sense of urgency. I would be turning 35 the next day. For the last 6 weeks or so I have kept a cagey eye on 35, not wanting to give it the satisfaction of catching me looking. I lay in bed pondering the idea that I could be drafted as point guard for the Lakers now, and during my first interview I would face the press and they would begin their questions-

When are you going to buy a house?

Are you seeing anyone?

do you want to have kids someday?

That’s right. I can feel the pressure ratcheting up. What was “free-spirited and adventurous” at 23 becomes “unmotivated” at 28, becomes “unfortunate” at 30, becomes “weird” at 35.
I’ve always been stubborn and averse to good, sensible advice from people who care about me (What are they up to? Who sent them? What do they really want?) and I can’t say that particular trait has served me well. On the other hand I’m also know for last-minute comeback heroics. When I was a baby my mom tells me they had just about given up on having a child who would learn to walk. I didn’t even bother crawling. My preferred method of travel was scooting backwards propelled by a jackknifing left leg across the terrazo floors. One day, as my parents watched their retarded, or maybe just lazy son move backwards on his ass through life, I just stood up and walked across the room to them. That’s still my style. When the time is right I will buy the shit out of that house. I will marry the hell out of some woman, and we will raise the crap out of some kids. I hope the house is woodsy, the woman is latina, and the kids can learn to walk, one way or another.

I forgot to tell you about my life-affirming, not dead yet, solo ride to Munson. The drivetrain, oh it tried me, but I think we’re starting to get along now. More on that later.

‘Tis true my friend ’tis true, I sold you out.”

Sasquatch has been talking a lot about getting a road bike, because “It’s all about the miles baby!, the 1/2 speed road miles!”. I understand his infatuation with distance, I’ve been there, I can feel the pull to keep going and going. As SQ said the other day, “I could ride to Pennsylvania right now, I just don’t give a FUCK!”

A road bike however, is not the answer. In fact, I have met two cross-country trekkers in my life and neither of them were on road bikes. Both of them road mountain bikes with slicks, and full pannier rigs, but I’ll save those stories for another post. Of course, the S’quatch and I aren’t talking about the 70’s style ‘lose yourself to find yourself’ odyssey, we’re going more for the alpine style, light and fast, single day distance thing.

All that to say, that he had warned me about his wife, um, Mrs. Sasquatch? (that doesn’t sound so good does it?) and her staunch aversion to the road bike plan. As his cycling mentor I expect he thought I would produce a well-spun defense of the road bike initiative, assuaging her concerns for S’quatch’s safety and continued physical integrity. He forgot that in all circumstances I am pretty much intimidated by Mrs. S.

Don’t judge me, you haven’t met her! This woman has a quick mind, a sharp tongue, and a terminator-like wit to splay your weak argument like a cleaned trout.

So she asked me, “What do you think of this road bike plan?”

I folded. “He’s going to die if he gets a road bike! At the least you will have to drive further and further to rescue him when a “mechanical” waylays him along some molten, summer highway.
Road bikers are dicks anyway, I continued, (sorry boys, its part of the story) you won’t like his new friends. He’s going to shave his legs, start drinking protein powder, wearing Oakleys, you just don’t know! I for one, will probably never ride with, or even see him again! He might as well buy a handgun and a fifth of bourbon, it would be much safer.”

So the road bike fever passed. Don’t worry S’quatch, we’re going to get the miles, one knobby mile at a time. 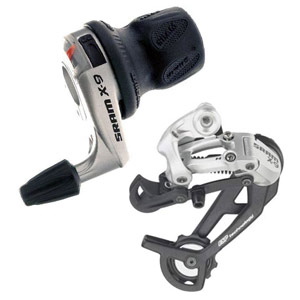 I am all suited up in my purple man-o-tard ready to go for a ride. The urge to crawl into bed for an afternoon siesta is powerful. I find myself in this situation almost every day. I try to ignore all of the useful knowledge out there about “training” and “rest days”. Maybe I can’t get any faster, (if any of my foes, I mean “partners” were reading this they would be praying for it to be true) but discussing riding bikes as exercise really gets me down. I’m no fitness freak, many will attest to that. I like to ride for the vroom,the swoosh, the clinkety-clank, the ratta-tat-tat and to quote a great warrior, the governor of California, “To watch my enemies fall before my sword like wheat in the field”. Any added benefits to health, longevity, and wellness are great, but if I wanted to be a skinny man with low blood pressure I would quit smoking and drinking and go to bed at a decent hour right? Right.

Fuck the nap, I’m getting out there.

Update: Broke chain practicing bunny hops in old Publix parking lot. Replacing a drivetrain is such a fucking nightmare. Don’t bother telling me to “replace everything at once” I already know that. New cassette tomorrow to join the new chain, shifters, and rear deraileur. It could be worse. I could own a boat like my neighbor. I hear him grinding away with the belt sander or some such shit. Not my thing, that’s for sure. “Recreational working” requires some other flavor of demons than the ones throwing the beads at this Mardi Gras parade.