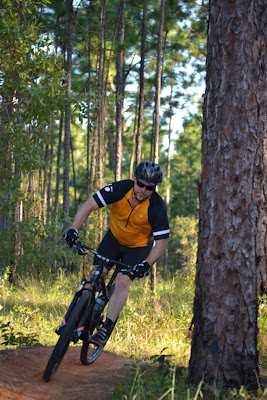 It took all summer, but here is the author stampeding through the trees on his new Santa Cruz Highball C. For its inaugural run I took it to the Munson Monday Time Trials, aka the only mountain bike race I have ever done. Despite a nine-day vacation/ fish taco tour of California, a total of 25 miles ridden since the last time trial, 5 passed riders, and a mechanical, my time was…about the same as the last two times. This proves that is really is the carpenter and not the tools that count.

Nothing wrong with nice tools though. It is better to have one than be one.

The Munson Monday Time Trial series deserves its own mention here as well. I called the starts last night, giving each rider their own unappreciated and distracting Juancho pep talk at 1 minute intervals. It gave me some perspective. Things started with some of the fastest known trail assassins in town, and tapered down through the ranks of the has-beens, never-weres, gonna-be’s, and don’t know they are’s. People raced for pride, fun, or some unknown secret they kept in their hearts. The last racer to toe the line was a self-proclaimed grandma who started riding in May, and when she finished her lap 30 + riders roared her name as she climbed the final hill.

Made me proud of my town, and hate group events a smidge less.

4 Responses to A New Dawn (birth of a bicycle)