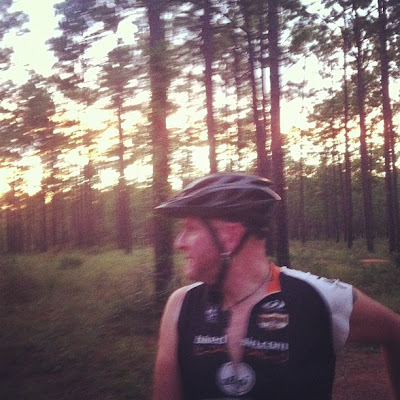 I saw a small group of riders clustered at the bench by the trail-head as I climbed the winding path from the parking lot. My plan was to stop, set the clock, and proceed to disappoint myself with another lackluster time trial effort. I didn’t really care about the clock part. It is just something to take my mind off of hard things, and have a reason to dig into the soreness.

I recognized his profile from a hundred dusky yard out. We call him Big Worm, but to be honest, he deserves better. Just the sight of him caused me to bring my knees and elbows in, straighten my back, check my right calf for rookie marks, and downshift to a high tempo spin, in other words- polish up my act. Flanked by five guys ranging from 16- 50+, all of them stone cold trail mercenaries, I un-clicked with a big smile. It’s good to be seen on the trail sometimes, by people who understand what it is all about. Lucky for me they had just finished a “hot lap” so they were ripe for a cool-down.

There are some classic wheels to follow in this town on road and trail, but none are better than Worm’s. With no debate we insisted he lead out and the rest of us fell in like baby ducks. I don’t think I know what the issues are, but confidence must be part of it. Knowing that you are riding a fast enough pace to keep everyone occupied, but not so fast that anyone falls out or blows up, is a hard thing. Most guys I ride with, including myself, take riding point as a direct challenge and pretty much “go ’til we blow.” It’s only fun for the first 8 minutes, then it can get lonely.

We almost piled up when a Pygmy Rattler crossed our little peloton. In our scramble to avoid the threat, we failed to see it now pinned beneath a front tire, until a slight shift set it free to shoot for the tall grass. Seeing snakes on the trail is a gift. Not seeing snakes on the trail is the concern. Snake season is almost over around here, and the Grey Fox Squirrels come out to reign. I’ve seen both snake and squirrel in a matter of days as everything handles their plan for winter business.

It wasn’t the fastest ride (nor the slowest by far!) and it wasn’t the longest ride, but it was the ride I needed last night. Bunny-hopping rollers in the near dark on the way to the parking lot I had a mindless moment- an infinite split-second vacation- where there was only this wheel now that wheel, released from the earth then reclaimed by it greedily.