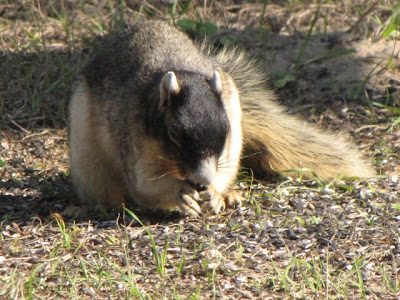 My paternal grandfather, Ollie, whom I called Papa, lived in a little enclave of a trailer park for all the years I remember. It was a community on a little lake, with a pavilion where people gathered to fry bluegill, crappies, and bass the residents caught as they enjoyed their retirement. Papa was an anchor in that park for a lot of people, so I remember him driving friends to the doctor, fixing lawn mowers, and generally holding court on his front porch where he sat on a slider, legs crossed and usually smiling. I remember him as a happy guy, clever with his words and hands.

His part-time job in that park was taming squirrels, who would one by one learn to trust him and take peanuts from his fingers. When he sat out on the patio, the squirrels would gather about the edges behind ficus trees and hanging ferns, twitching their tails and sniffing in anticipation. The park, the squirrels, My papa, and his frost-blue Buick all lived under a dome of oaks and tall pines.

I think this is one of the reasons I love Munson Hills so much. It smells like I remember Charlie Oaks Trailer Court smelling. The squirrels that live out there are mythic in size, equal parts bold and elusive. Big bull grey fox squirrels– as big as cats- rule alongside the Pileated Woodpeckers who coast between the trees. Last Sunday I got to ride out there with a long-time friend who moved on from Leon County to greater things. His name is Mel, but that is not his real name of course. There are no bike trails in Singapore, where he lives today, and yet he rode like it was 1991 when he was known for pedaling hours beyond the rest of us, and into neighborhoods and land we never saw.

The Big Greys were either out in force, or one was following me, as I sighted at least five in our 8 mile cruise. I stopped at one point, dumbfounded at the nonchalance of one particular squirrel stallion, shimmering black stripe down his back, with grey wispy sideburns. He rooted and picked over acorns not 20 feet away. I whistled a long, low note and he spun to face me. “Hey old squirrel!” I said, and my words echoed back off the packed needle floor. He wandered a little further off as Mel approached to find me standing in the trail, resting on the bars. “Are we almost done?” he asked, ready to put this ceremonial roll in the books.

“Yeah, just one last little hill that goes a bit further than expected, and we’re out of here. “No reason to hold back, so just charge it and get yourself good and winded.”

I wanted a picture of that squirrel so bad, but he wouldn’t stand still and I’m no photographer. More often than not, as I’m slowly learning to get used to it, you just have to appreciate that you were there for the moment at all.