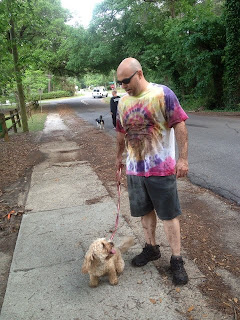 Charlie the black Labrador disappeared in the storm on Sunday, a pouring down of buckets and crashing thunder that laid most of us down flat with the weight of the  falling pressure.
It has been a run of the putrid touch lately, when my every effort to get it right turns up shit. It is a syndrome exacerbated by effort, churning more and more best intentions into disappointments, let-downs and failure.

“My aged black lab escaped my yard Sunday during the storms. He is black, about 100 pounds, and he has a difficult time getting around, so I’m not sure how he got further than the drive, but he is missing.  If anyone has seen him, please let me know.  He answers to Charlie, though usually only if he thinks food is involved.”

I read that message at my desk and thought about old Charlie.  Was he off on a rounder? Scarfing cat food off or porches and licking wrappers behind Vertigo burgers? Had someone taken him in, unable to find his people? Was Charlie alive?

I thought about that dog all day as I willed myself to not leave the building, my job, and my financial security behind.  Such a feat of strength by the hunger artist that goes unnoticed by his distracted audience. I exited the building to no applause, although I took my bow.

The social network was alight with erroneous sightings of Charlie, and one concrete piece of information, however ominous-

“There is a black lab laying in the water in the Greenway by optimist park if anyone is missing a black lab it is alive but seems disoriented.”

I called Charlie’s people, and she said that she had been up and down the greenway twice and saw nothing.  I felt the draw, the inexorable draw of adventure, redemption, yet another go at getting it right. I wanted to find Charlie, and I felt that I knew where he was.  Down into the greenway we went- my wife, my neighbor JJ, and our two intrepid search dogs, Summer Chanel (pictured) and Max the Australian Shepherd.  Find Charlie! we beseeched them and they did nothing of the sort.

The greenway is a lowland drainage, which in lesser neighborhoods would be separated from the community by a chainlink fence and no trespassing signs, but in idyllic Indianhead Acres, it hosts wild foxes, a beaver, a walking path and even in early spring, every mosquito on earth.

Our crew trundled down the long stairway into the covered, close air of the swamp.  I hung back, allowing myself to wander off the path and into the knee-deep marshy thicket.  I could see the basketball court, the nearby road, and hear the kids playing in the playground just a hundred yards away, but this was a wild place and I walked it the way a wild place must be walked.  I walked cautiously along a muddy rivulet invisible from the main path, obscured by thickets of grass.

A gentleman with a long white beard and a rugged bearing, Charlie’s other human companion, went back up the trail to find a tarp to help us move him, and Charlie made a move to follow. He was a willing old dog, but he just wasn’t able. His tired old hips would not hold him upright as he repeated his effort to get unstuck from this place.  That was it for me.  I knew how Charlie felt, stuck and tired, staring hope in the eyes yet unable to get there.  “Charlie, it is time to go buddy.  We are getting out of here.”

I knelt down in that  muddy water, my knees pressing into the walls of this rutted stream and I scooped my arms around this 13 year-old dog, 90 lbs made heavier by muck and mud, and I lifted him up, cradled in my shaking arms and laid him on the grassy bank above us.  His owner and I worked ourselves out of the crick and Charlie stood wobbly and tried to head up the trail, unable to hold himself upright for long.  I thought once of my back, then put that thought aside and thought, I will carry this dog out of here or stay here with him forever.  Up he came, and he felt so good against my chest, this thing that I had gotten right.