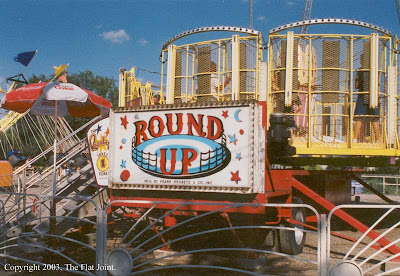 .
Thanks to Tommy Torso for a perfectly wretched ride yesterday, I really needed it. Golf out-scored riding 2 to 1 this week, and it ain’t looking good for riding today either. Fore!

This weekend brings another powerhouse of cultural events to the greater Capital City area. We are lousy with culture once again. The Scottish Highland games will be be going on north of town. I went once with the best intentions of sampling my native culture, but I was a bit off put by the staggeringly expensive beers (perhaps it was the exchange rate from Midtown to Bannerman?)

There were men throwing sheep over bales of hay and dogs herding a squealing gang of children around a field, and yet, it was all somehow lacking. Still, in theory it sounds like a good time and might be worth the $147.00.

If that doesn’t blow your kilt up, there will be an art show in the Parks downtown, also advertising a beer garden, or garten? I do like the art so you might find me down there sneering and sniffing at people’s life’s work. Good fun.

Tallahassee is hardly distinguishable from the Upper East Side (of Tampa) these days. Wine bars in the Strip Malls, Starbucks in the Target, I just hope it doesn’t affect the price of Arugula.

Tomorrow the bikeposse crew (Worm, Wreckin’ Ball, and their Zombie army) are riding sometime in the middle of the night like 8:30 A:M and then they will be sitting in a garage waiting for us to come crush them at Ping Pong. Other than that, are there any good rides on the docket? What about you out-of-towners, where will the fun be for you this weekend? Maybe I’ll join you in Uzbekistan or wherever.

And what exactly is a “docket?”

← The Flashback Episode
Guess my age →