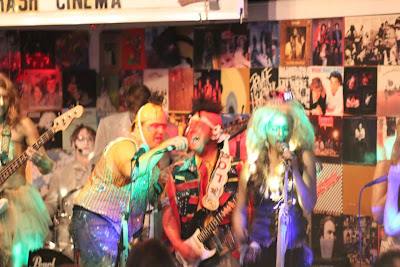 There was so much going on this weekend I passed myself on the road at least twice, and once I saw me give myself the middle finger. “Why the nerve of that guy!” fastidious me thought to himself, and “Screw that dude!” hardcore me thought back. Together we managed to get a lot done. We hosted the sale of a 1971 VW Bug between family members and nobody got shot. We delivered 13 members of the above glam-rock Cirque de Silly act GlITTER CHARIOT to the stage Friday night, or as close as we could drive the boom bus to the stage through the crowd of 5,000 at Railroad Square. We chased a hate-fueled Mystery for 22 miles on Saturday through the ruins of abandoned suburbia east of town, then managed dinner with the gathered clans and front row seats to a lights-out performance of GC at Bird’s Aphrodisiac Oyster Shack. Tucked in at midnight, then up for the final touches on the towing arrangements for the VW. We squeezed, or maybe squozed another funsies lap at the park with Tommy-boy, who had just finished running a half-marathon his own self.

Heard the news about two trail brothers going down hard, one with a separated shoulder, the other with contusions, blood, and whatnot. The bench is piling up with the maimed and mangled and it’s early yet. Still had time to write in fragments, not sentences.

Time to get serious about a new bike, and that’s the real story here.

2 Responses to A Magnificent Obsession