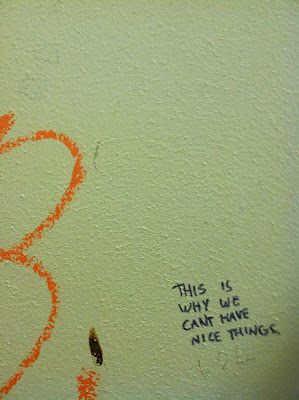 *photo taken in a GA gas station bathroom, just out of the shot are OBAMA SUX and HELEN IS A WHORE apparently inscribed by the same implement. This indeed, is why we can’t have nice things*

A bear lurking in the darkness can do things to the mind. The camp citizens were rattled after two days of cooler sorties occurring in daylight and darkness. Slabs of ribs, deli-wrapped packages of knockwurst and corned beef, dozens of eggs. Not content a thief, this bear destroyed things, tearing camp kitchens asunder and leaving his calling card teethmarks in coolers. There were babies to protect, and sorely few armed among the besieged.

We, our party of two, were not the cavalry. We should have left the van packed, and ventured into the north Georgia wine country. Instead we joined the refugees, failing to recognize the terror in their creased and inebriated faces.

Like all marked for doom, we huddled in packs and whispered.

Sunlight is scarce on this mountain, tucked into the crotch as we were. The day is spent in a cool shroud, where the night air never dissipates and harried campers hustle through chores because night is coming.
Night is always coming, coming ,coming.

In darkness we huddle around the oily fire of damp logs and the children sing songs against oblivion. We laugh at gallows humor and cut it short only to pull from a passed bottle of com-misery. We wander off into our tents in pairs and knots, hoping our camp is a bit tidier than our neighbors, our poor sloppy neighbors who bring this threat down on our heads. Let it be their Chorizo tonight, not ours!

We drift off into nervous sleep to the sound of, WHO’S OUT THERE? WHAT WAS THAT? and I THINK I SEE IT MOVING THROUGH THOSE TREES!

Sanity is always the first victim.