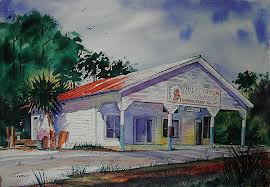 It’s tourists inside and locals outside on a Friday night at the Indian Pass Raw Bar. Grinning people with sunburns and dogs smoke cigarettes and visit around a cast iron smoker on the patio, while out-of-towners from Orlando to Atlanta line up elbow to elbow at tables inside to partake of the authenticity. It’s beer and oysters on the honor system at the Raw Bar and I don’t know how anyone keeps track. The crowd is well over 50, scrubbed clean, men casual in their Columbia shirts and Sperry topsiders, the women in gauzy shawls, rough cotton capris, and linen. We aren’t local and we aren’t rich so I feel like we should remain in the doorway, but we take two chairs at a table with a couple, bankers from Atlanta they say, who own a little place on the gulf front along Cape San Blas rd. It’s tiny, Linda says, just 900 square feet. That’s all they want to keep up with, and I understand as that is the size of our house. They are retired now, after years working for the Savings and Loan Associations. They are nice, engaging in conversation about their 43 years of marriage, the years in the finance sector spent overseas in Asia, and how Gary can eat oysters until they quit bringing them. I wonder if they bought their little place on the water before or after the Savings and Loan scandal in the late 80’s -early 90’s, the debacle that provided the blueprint for the 2008 sub-prime mortgage dividend bonanza.

This forgotten coast was once all paper mill land. Paper became unprofitable at the tail end of the 20th century, and St. Joe, the company that owns these, and 500 million other acres of Florida land retooled itself to develop the land. They moved U.S. Highway 98 inland and built utopian communities with playful names like SummerCamp and Watercolor.

The Raw Bar is an old company store from a Turpentine company a hundred years back. It remains as an icon to the true panhandle coast culture, so all can drop in and anoint themselves with Crystal hot sauce. Pour yourself a beer, slurp oysters off the half-shell, trade stories about catching Red fish and where were you when Kate came through and flooded out the bay?

I don’t think this coast is forgotten, people just don’t really remember much about it.

6 Responses to The Forgotten Coast