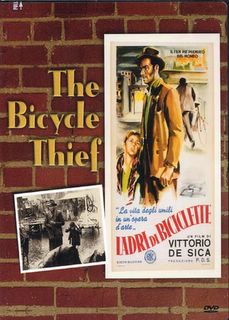 My brother had this aluminum Trek for years. It wasn’t a very flashy ride. The geometry was very square. The seat was one of those gel saddles, that mush around like you’re sitting in a wet diaper. He never rode it, and I understand why.

Then it got stolen. The thief broke into the neighbor’s house, stole two handguns, a Playstation 2, a handful of games, and a jar of poker change. He escaped on my brother’s bike, carrying all that shit with him somehow. The neighborhood was up in arms, it was a bad time to be a stranger on the avenue. Even though my bro didn’t ride his bike, he was still justifiably pissed off about it. He wanted to own a bike damn it all, whether he rode it or not.

So now he’s got a Jamis, bike of the chosen people, and he’s riding that thing whenever and wherever he can.

So thanks bicycle thief, but don’t let us catch you on that Trek. That thing is slow and we will get your ass.

Hopefully none of you have suffered the indignity of having your ride stolen. Lock it up, and avoid the old school U-Locks, if you don’t already know, they open with a ball point pen in about 5 seconds.