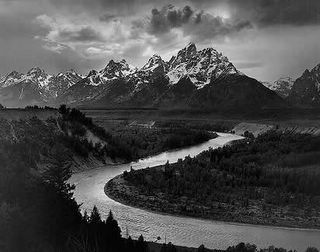 I woke up thinking about the Tetons this morning. They were the first place I lived outside of Florida. Talk about setting a high water mark. While not everything went smoothly that summer–10 hour days, six days a week, love quadrangle in the kitchen– I remember snow falling on the 4th of July, bears sneaking around the ranch, a sandstone cave high on a bluff overlooking the Gros Ventre range. In that semi-lucid state just before waking, I squinted my eyes against the glare of the sun on the Snake river. I felt the thrill of being up high and far away. Fields of lupine, indian paintbrush, and sagebrush. Pints of Guiness at Dornan’s.

I hope Sasquatch shows up with a post from there today, and hits on a few things I might have forgotten about. Maybe I need to get back to the big sky country myself, just to have a look around. It makes me kind of sad to think of all the places I’ve been that I may not make it back to for a visit. On the other hand, maybe I’ll spend another 12 years seeing them all over again, with some new stuff in between. Hell, there’s plenty of time for everything right?

← A body in motion, a body at rest-
Singletrack Snack →