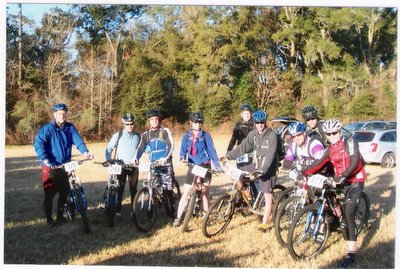 In an unprecedented act here at the BRC, I present the actual human participants of this chronicle. 7 known characters are in this image, as well as 2 who are currently applying for nickname status. I’ll let you work on the who’s who on your own time, because I have a story to tell.

Note to non-riders: the following introduction is an excuse, and a damn good one, and that’s all you need to know.

Similar to the time I saw an Eastern Diamondback Rattlesnake on the trail and flung myself to the ground, offering it my neck- I impulse purchased a new saddle the day before the 50 miler. Unfortunately, my seatpost is cammed so hard into my frame that I could not lower the saddle to compensate for it’s increased size. Therefore I entered this ordeal with my pedal stroke slightly extended. That’s all I got. I know it isn’t much, but that’s it. Of the 8 hours I spent in the woods on January 16th, I passed much of it alone, in pain, and singing to myself. When I wasn’t alone or singing to myself I was still in pain, and cold. I decided to “go light” and chose not to wear a nylon windbreaker of any kind and the standing 30 mph wind ripped through my single layer of polypropylene covered by a lycra jersey. The following account is true to my recollection and subject to correction by one and all. It is hard to separate the events of the day from the protective imaginary shell I constructed to insulate my fragile Ego from my terrified Id.

I arose at 5:45 A:M in the Reddick pre-dawn. I was rested and a cup of coffee away from ready. Like an elite fighting force we bolted down piles of grit gruel, sent up a few silent prayers and loaded into the trucks for the dash up I-75. Payne’s Prairie was glowing under the sunrise as S’quatch and I, alone in Barbie’s Little Dream Truck, hung to the taillights of Pa Ingalls’ 5 ton diesel. After check-ins and the above group picture, we rolled onto the trail promptly at 8:30 A:M. I followed on the wheel of the Mayor (pictured far right) for the inaugural departure and then quickly realized he was traveling at an insufferable pace. The trail was in beautiful shape, flowing single track of packed dirt ready to grip knobbies as we carved along at a nice clip. I was cold, but I figured the day would warm, as would I.

Mile 5ish: My chain breaks. Matt from West Palm stops to offer a tool, which I need, and I am back in action a few minutes later. Big shout out to Matt, who also got a quote in the Gainesville Sun.
Dear Matt, I guess this has been your 15 minutes. I hope it was worth it.

Mile 9: First Sag Stop- Sasquatch is attempting to fix a flat. I assume he is done for the day as he usually refers to his bike in this state as “broken”. My level of suffering is already acute at this point, with my knees and Achilles’ tendon’s registering the ill fit of the saddle. The cold wind on the bald point of the hill is too much for me to endure. I press on, aware that I am abandoning S’quatch to his own opposable thumbed fate. “That’s the last of him, my Id chortles into my inner ear, “only 7 more to crush”. Off I ride.

The singletrack continues to flow as Hambone (4th from right) and I connect for a long, mutual run together. I’m out of the saddle a good bit, so life is good for a while, swooping and dodging through the trees and along the piney ridgelines. “Mountain bikes are awesome!” says the Id, “Juancho, you’re awesome!” says the Ego.

Mile 18: Second Sag Stop- This shit is starting to get for real now. People are not smiling anymore, the black tar mud has seen to that. I am cold, like hypothermic cold, because we have been shadowed from the sun, deep in the wet lowlands for about two hours. Bikes have been pitched into the palmettos and used as stilts to cross open water by now. The feet are soaked and will remain so for many cold hours to come. This marks the beginning of my dirty GOO habit. “Espresso Love” flavored baby, and I will kill for it if you want to press the issue.

Eleven miles to go to the lunch stop, the distance of the most casual of rides, and I am already plotting my escape plan. A catastrophic mechanical or physical is the only thing that will save me now, and I examine all possibilities. Somehow I need to ruin a wheel…

Mile 21ish? Taco, 3rd from right joins Ham and I after wandering an extra 3 miles for not realizing he should be following the “A:M” arrows instead of the “P:M” arrows. “We will finish him!” says the Id.

Mile 25: I am visited in my mind by, in the following order: My middle school gym coach “Butch Downing” who often lectured on the insipid dangers of mediocrity, a marching parade of sexy librarians, and a rubber mallet that threatens to thump me on the soft nougat-like base of the skull-as a gesture of mercy. I quit talking to the outside world. I nod eagerly to the mallet.

Mile 29 The Lunch Stop: Two young guys, like 8 years of age, are at the top of a cruelly steep hill, gatekeepers to the hot chicken soup, and piles of PB&J’s. They cheer for us as we struggle up the sandy rise. “Come on 234, you can do it!” One screams. Tears fill my eyes and I vow to leave him everything in my will. The underwear that doesn’t fit, the comic book collection, the taken apart Rubik’s cube, he gets it all God Bless Him!

My friends cheer and wave me into their circle with full mouths and plastic spoons, in contrast, I hate them all and vow to make them suffer as I have suffered if it is the last thing I do. Thankfully, S’quatch is still miserably far behind me, never to be seen again hopefully.
I try to quit, to tell my buddies I’m done, but I can’t. I quit talking to the outside world hours ago, and I just plain refuse to open my mouth. My legs stand up. I ask them, “Just where in the hell do you two think you’re going?”. The legs reply, “Look at us dude, do we look like quitters? People call us King and Kong for the love!” To which I reply, “That’s stupid. Absolutely nobody calls you two King and Kong!” And they have the final word, “YOU call us King and Kong!”

We get back on the bike, my legs and I, and ride away from the pink bail-out arrows into the forest beyond the chicken soup, the fire, and the excuses.

← Feet Dry
A Pause for our Sponsors →