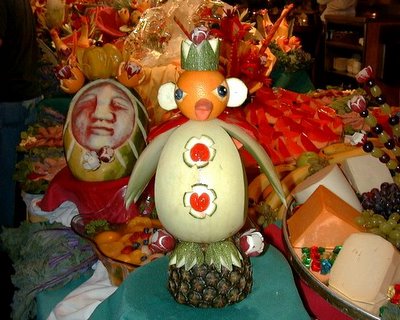 Prepare yourself for a Juancho-brand hate-fest or get out now.

I can now say with some conviction that cruises attract two particular types of people: the morbid, and the morbidly obese. Often these distinct subcultures overlap. Imagine my sincere excitement to learn that my first and only cruise experience of my natural born life until the day I die coincided with “Goth Cruise 2006”. This event, which I imagined to be one of a kind, is actually a phenomenon well represented throughout the cruise industry. After some research I discovered that the “Goth” subculture frequently gathers aboard cruise ships to celebrate their eternally bleak outlook on life. Please refer to the following interpretation of the gothic psyche if necessary.

Goth unashamedly celebrates the dark recesses of the human psyche. Put the back of your hand on your forehead, and you’re there: dark sensuality, sweeping sadness, morbid fascination, forbidden love, the beauty of enduring pain, you get the picture.

Wandering aboard the garbage barge, Sovereign of the Seas, a preponderance of black eyeliner, fishnet, and plunging necklines on black velvet evening gowns peppered the crowd, and you wouldn’t believe what the girls were wearing! How is it that this culture which associates itself with cemeteries, Anne Rice, and the color black has made a tradition of gathering to the sounds of steel drum bands and all night buffets?

No matter, to be fair, the Goth folks were without a doubt the more intellectual, congenial, and interesting folks aboard the city-sized cesspool, the Sovereign of the Seas.

The other group which dominated the vessel were the extremely fat tourists from landlocked states. Wow, there were some big ole boys and girls on that boat. Enough so, that my main paranoid concern became sinking rather than legionaire’s disease (which I most certainly now have). I did not realize that food played such a major part in the cruise experience. Many of these people obviously choose this vacation because food is included in the package deal, and they intend to eat themselves to an essentially free getaway.

While I’m quite aware that my own snobbish attitude did nothing to contribute to the overall festive atmosphere of the floating nightmare, The Sovereign of the Sleaze, I did try my best to ignore the seasickness, the exorbitantly priced beers, the obsequious and pandering international staff, the bad Vegas-style shows, and the preponderance of drunken conservative blather overheard (Elton John is a deviant, Hollywood is destroying our values, Elton John’s partner in matrimony destroyed Elton John, whatever.)

In fact, I do remember enjoying myself at one point. We had been at sea for something like 20 hours on the 4th day and the weather was grey, the clouds were low, and the water was a dark, metallic, blue. I was as far forward in the bow as possible, and at the lowest deck available. Land was nowhere in sight, and the wind was blasting and chilly. I looked down and thought to myself, “That’s death right there bubba, pure and simple, fall in and you’re done” and it was unimaginably beautiful.

I guess that makes me Goth.

← Live from the ocean
The Tour de San Felasco →