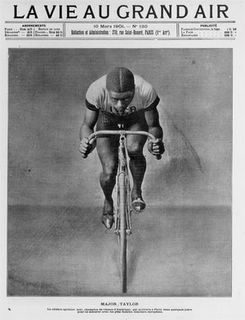 This is an excerpt of the full article written by Brian O’ Connor.

“I shall never forget the thunderous applause that greeted me as I rode my victorious lap of honor around the track with a huge bouquet of roses.”
—Marshall “Major” Taylor

The din of 12,000 spectators enveloped Marshall “Major” Taylor and his three rivals as they banked the final turn of the 1-mile world championship at Montreal’s Queens Park velodrome in 1899. Two opponents, brothers Tom and Nat Butler of Boston, had the tactical advantage on the pitched oval, partnering to jam Taylor. But on this August afternoon, the 20-year-old African American was unstoppable.

Unleashing the furious finishing sprint that made him the most feared, most respected and most popular bicycle racer of his era, Taylor flew past the Butlers and France’s Courbe d’Outrelon to win by a tire-width. In victory, Taylor added a new title to his glittering résumé: world champion.
The FastestToday, as Lance Armstrong eyes an unprecedented seventh Tour de France victory, one of the United States’ first sports superstars, a cyclist no less, has been consigned to obscurity. The irony might be amusing if it weren’t profoundly heartbreaking.