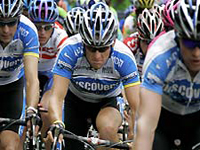 OK, now that the hilarity and drama of yesterday’s ride is behind us, how about that race today?
Like golf, a stage of the Tour can be, well ,boring in the early part of the race, but the finale is worth the investment. A lot of hard, hard men cracked today and it wasn’t pretty.

That Rasmussen fella, he sure is skinny. He’s the waterbug prototype. They should make him carry a watermelon or something to even things out for everyone else. Sure he didn’t win the stage today, but he has been hammering the mountains day in and day out, unlike what’s his face who won the stage today. Hell, Rasmussen didn’t even look like he was paying attention on the way up, just cruising along, thinking about lunch, or that last episode of 6 Feet Under.

Is it all over? Did LA shoot his wad today? Stay tuned to find out.