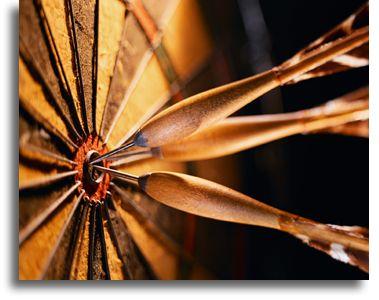 A buddy who lives up in Detroit e-mailed me yesterday. He says he reads the BRC every day but finds it somewhat limited in scope. Apparently I only write about bicycles, bicycling, and bicyclers.

He believes that this topic can only be mined for so much good material and it will eventually go stale.

It made me stop and think.

What the hell else do I have to say?

Politics? Nobody wants to hear it and I get angry too easily.

Love? I wouldn’t know the first thing about it. I mean, I could say I love kicking S’quatch’s ass on the trail, but that isn’t the same thing.

Updates on the family and kids? The family is fine and if there are kids, they haven’t found me yet.

Then it occurred to me, there is one other venue where I live out my scintillating, beyond the red carpet life. My back porch, and specifically, the dartboard.

Surely Mr. Detroit remembers the sting of defeat and the CHUNK-ping! of steel sinking in the bullseye. The dartboard is my television.

It isn’t a glamorous setting, especially this time of year. It is very damp out there, and gear mountain constantly threatens to invade the “social area”, but I tell you what, a lot of dudes would experience missing limb syndrome if porch operations came to a halt.

There is a word in Spanish, querencia, that is used to describe the place in the ring where the bull chooses to make his stand against the matador, the pecadores, and the inevitability of his demise.

This dirty porch is mine. Where is yours?