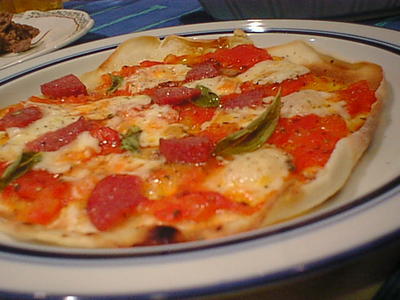 You live in Queens, NY and you use grits to dust your gourmet pizza crust instead of cornmeal.

This was done recently by my friend Mel (not his real name) while he was cooking up some homemade pie in his NYC hipster flat. Those of you who are familiar with Mel (Once again, not his real name) should take this opportunity to encourage him to exercise the 1 year plan, which has him back in Tally with a new Moots FS by February 06. The 2 year plan, which is ridiculous, involves staying in the city, saving more money, completing some sort of “schooling” and then returning to Tally, at which point we will have completely forgotten him and both of his plans. I mean, I appreciate his pragmatic approach to work, education, and a panic-free retirement, but really, who has a plan that lasts a whole 2 years into the future? I hesitate to commit to a weekend outing. What if something else comes up? (Not that anything ever does).

I would like to hear from some of you who may have a better vantage point than a single 35 y/o Man (with a capital M fuckin’ A right!) who has no savings plan, still rides a hardtail, and plans on working at a bait shop during “retirement”.

Dr. Detroit? Mrs. Dr. Detroit? Squatch? Squawtch? Hi-Tops? Sascha?(You can relate to the “first day of the rest of my life” dilemma), All the rest of you lurkers, shirkers, and overpaid office workers?

The choices for Mel (Not his real name) are clear.

NYC, a fat salary, and no bike vs. Tallahassee, ?(definitely less) salary, a sweet Moots, and some friends who appreciate him more than they let on.

I’m trying to use this site responsibly, so you be the judge.

Juancho (Not his real name)

← Surrounded!
Time for the Saints to get Marching →

22 Responses to You know you are homesick when…