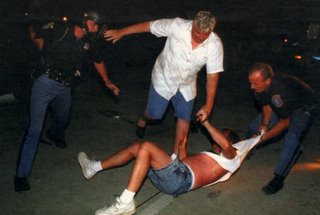 Regular reader, Dr. Detroit, submitted the following thought-provoking essay of his new city on the eve of Superbowl XL. Enjoy!

When I was asked to provide some “man on the street” perspective about Detroit to the BRC community my first thought was to explore themes of fear, hate and anger.

There are still visible reminders of the riots that happened almost 30 years ago and many Detroit residents still hold grudges. As a newcomer it is difficult to penetrate all this history and bad blood.

My next inclination was to turn my thoughts to themes of loneliness and despair.

For you see, Detroit is a city on the decline.

In 1950 Detroit had over two million residents but today there are less than 900,000. To those left behind you can imagine them proclaiming “where did everyone go?”. The term “urban farming” has been bandied about as a way to make use of the vast tracts of unused land. This latest exodus can’t even be described as “white flight” because the white people left years ago. No, today it is the middle class blacks fleeing oppressive taxes and urban blight in hopes of finding something better in Taylor, Livonia, or Troy.

Despair seems to be hopelessly associated with Detroit because of the auto industry. Outsiders fail to grasp the interconnectedness of southeast Michigan with cars. With each new headline proclaiming another parts supplier bankruptcy or Big Three layoff you can almost hear the collective groan emitted from the city. These people are little prepared to face the economy of the 21st century. Most have only a high school education.

The strangeness lies in the fact that this has been enough here for generations. Everyone here has a “cottage” “up north”. We have more boat registrations than Florida. Life is good for the current crop of auto worker but they don’t connect their bloated pay with the decline of the auto industry. But life moves on, with or without Michigan. I don’t think we have hit the bottom yet.

But now, finally, I will settle on the true theme of this missive. That theme is HOPE. Why hope? Because the Super Bowl is in town and a fresh feeling is in the air. My office is right downtown, One Woodward Avenue. I have witnessed the transformation taking place firsthand. New sidewalks. New facades. People are starting to trickle back. Loft housing is popping up everywhere. . A vibrant theatre district and gleaming new sports stadiums. The casinos are all building new hotels. Funky restaurants are opening; the roads are slowly being fixed. The riverfront is slated for redevelopment. Everywhere you look are signs of hope.

If you could describe Detroit with two words it would be pride and insecurity. Even with all the issues I have touched on (and I barely scratched the surface) Detroiters remain fiercely proud. Now, with the world watching, the unspoken question is “Will they like me”? Early signs are good. My hometown of Jacksonville was ravaged in the press last year when the Super Bowl came to town but I haven’t seen anything close to this with regards to Detroit.

So, dear BRC readers, don’t feel sorry for Detroit. The city is turning a corner. The pieces are in place to reverse recent history. The Super Bowl is in town and Detroit is a great place to throw a party. Hope is in the air.

2 Responses to Detroit: City of Hope