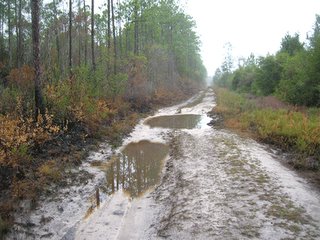 Now, just because a thing can be done, that does not make it a good idea. I can hit my thumb with a hammer. I can rent the entire Keanu Reeves movie collection, and I can eat sand- but none of those things are a good idea.

Certain Joe’s Bike Shop affiliated riders are planning a 75 mile cross-swamp ride from the steps of the Old Capitol Building to Sumatra, FL a reclusive enclave on the other side of a swamp called Tate’s Hell.

I have crossed Tate’s Hell before, in a canoe, and it didn’t go so well for us. The New River eventually diffused into a maze of stillwater tributaries none of which resembled the map.

There was dissension among us, the type of nervous backbiting associated with a group of people resenting the decisions they had made which brought them to be neck deep in black swamp water dragging canoes full of gear over cypress knees. I had a machete, and I hacked at everything, not to ease our way through the clinging vines, but in the futile hope that I would kill whatever reptile was more than likely poised for attack beneath the cover of prehistoric water lilies and decaying moss.

Hours of this slogging went by, and the possibility of climbing back in the boats to hunker in place for the night became a real likelihood. This motivated us toward more fevered slogging.

We found some elevated, if not entirely dry land and the party split. Three of the crew walked off in search of the vehicles and three of us remained with the boats, sharing the last of the pop tarts huddled beneath an overturned canoe in a drizzling rain.

Darkness came, and we waited- silent, resigned, and miserable.

Then the headlights pierced through the hopeless horizon and there was our team! Relieved, if not triumphant, we loaded the boats on a trailer and jumped in the truck. As we took off the boats came tumbling down off the racks, as none of us had bothered to secure them. Composure had left us with the first report of “Something just crawled over my foot” back in the swamp.

To ride across the swamp? 75 miles of roads like the one pictured above?

I would rather try to paddle it again.

This doesn’t mean I’m not considering it, I just wish that I wasn’t.

Dumb as a bag of hammers-