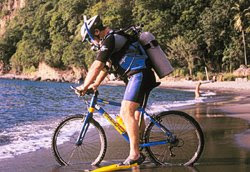 We can’t have nothing nice in this town. All of the work involved to plan the first ever in the history of all time Big Bend Cycling Festival and it coincides with monsoon season. It has not rained like that since February 22nd, 2008.

The scene downtown was strange, like a selective virus had eliminated all but the cyclists in the Capital City. Aside from the homeless, the crowd was either racing, with a racer, or on a bike. Cyclists are social isolationists. Next year I think the FAMU Marching 100 could add some flair to the proceedings. I hear they work cheap.

Seeing the streets of downtown cleared for bike racing was an astonishing thrill, and I congratulate the parties that attended thankless bureacratic proceedings to make it so. The weather turned so sour in the afternoon with multiple tornado warnings, lime-green skies and changing barometric pressure that made your ears pop-the events were cancelled. I hope this brings to rest the argument that road bikers are made of anything but sugar.
Poor darlings.

I met fellow online hack, RickySilk, or someone claiming to be him. He lost his race by 1/1000 of a second. Quitters never win Ricky, and winners never quit. Next time buddy.

Bigworm was lounging on his Kona Crumpy surrounded by his posse of loyal subjects (they are like monkeys, ready to be shot into space!)
I wouldn’t be surprised if one of that crew got a trophy.

Friday night our bikes were blessed in two languages by a priest, a shaman, and a random Jewish lady- which was nice-

No, I did not see them walk into a bar.

Joe, of Joe’s Bike Shop fame, received a Bike Saint of the Year award and his acceptance speech appears below in full text.

“Thank you. This is great!”

The fixed gear kids milled around like sharks because they do not have the ability to coast, and when the vegan pizza came out- they took the analogy one step further and frenzied on that shit.

The road race in Quincy had a bizarre finish for the Juniors with someone winning with a bunny hop at the line. Not bad after 84 miles of putting the hammer down. A professional from Trinidad & Tobago won the pro race and I can’t help but think of the Jamaican Bobsled Team on that note.

For those wondering where Trinidad and Tobago is located: find Brigadoon on a map, go North to Narnia, and look west.

For those wondering why the place has two names: I have no idea.

The Twilight trail is open for business, although I slept through the inaugural ride. Contrary to what I depict on this website I have ridden that trail more than most of you, so I accept my pass thank you. Now go out there and get lost like you’re supposed to do.

The Robot Army drones returned from their North Carolina mission a bit soggy and rusty in the joints from a steady 55 degree mist. We prescribed a little Ping Pong therapy last night and they seem to be working fine.

And that, my friends, is all the news that’s fit to print.

5 Responses to We Can’t Have Nothin’ Nice