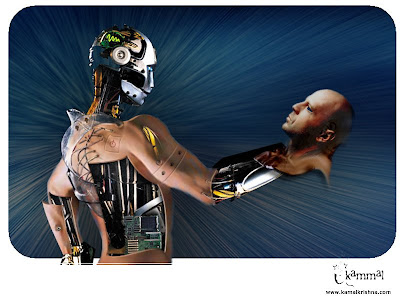 His, or more accurately its animate eyes scanned the forest. The attention to detail is remarkable. Small,idiosyncratic humanoid gestures fired off in a convincingly random pattern. A scratch of the nose, a tic of the eye. Amazing.

It had to be a product of the modern Mechanist movement if for nothing more than the seamless integration with a late 20th Century mountain bike. The Shaper/ Performance Enhancement Rebellion had peaked when prototype Lance Armstrong was finally proved to be the recipient of mitochondrial cloning technology without his knowledge (some say!)

This model was identified by a clever tattoo imprinted just below the helmet line on the back of the neck. It read: Dedicated Gear-Based Yonderer, or as it is known on the trails and in the bike shops around town- The Dogboy model.

I heard rumors that a new off-road edition was to debut soon on the trails in Tallahassee, FL. This location chosen in an anachronistic nod to the High Magnetic Field Laboratory which paved the way for the D.G.B.Y 2008 magnetic propulsion system. I didn’t expect to encounter it on the first solo forest deployment, but there it was- pedaling in front of me and mimicking human mountain bike rider behavior.

As a laugh the programmers saddled the cyborg on an antique Specialized hardtail to maximize intimidation on local riders.

I tried not to notice and just kept pedaling.

← On the Verge
El Dia Diferente →