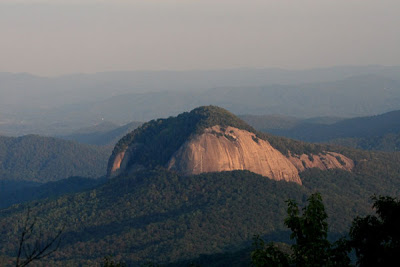 “You’re coming back for me right?” I asked. “Maybe” he said as he swung out of sight leaving me anchored to a couple of pieces of protection 20 feet above the Sentry ledge and still 100′ from the safety of the base of the cliff, where the yellow jackets and copperheads waited to welcome us down.

I demured his initial invitation to ascend the second pitch of the climb, reasoning that if he made it to the top and my next move could be descending then everyone would go home happy. We both took an inventory of the steps necessary to make such a thing happen, and came to the same conclusion. “The only way either of us get down is if you come up with the second rope.” I rested my scorched forehead against the hot granite and squinted the sweat out of my eyes. “On belay” I said, and with that I scrapped and scrambled another 100′ up the wall to two fixed eye bolts and salvation. While on rappel I descended off route and as I neared the second rappel station I realized one of our ropes was a might short of the deck. I anchored that rope to the wall and descended the second rope to the safety of the ledge. No problem.

Mystery came down behind me struggling to move the cursed purple rope through his rappel device as I had secured the end to the wall, which is apparently not standard procedure. Shaking his head, no doubt in wonder as to how he he came to have me as his only willing climbing partner, he easily down-climbed to join me on the ledge. We pulled the rope to bring it down to us and it did not move. We pulled and pulled and pulled. The rope was hung up 150+ feet above us and guess who was not volunteering to go up and un-stick it? That’s right, I was preparing to holler to the cub scout troop down the cliff to save us, which is also not standard procedure.

After some heavy sighs, Mystery worked his way back up the wall, taking up slack in his rappel device as he went, which is not such an easy practice, and quite nerve-wracking. Meanwhile I waited on the ledge and looked down at our other friend, The JJ, wishing he were on the ledge instead of me, and I was the one lounging with the Copperheads and the Yellow-jackets.

I climbed back up to the low-point of the rope to free it from my impromptu anchor. This would allow Mystery to rappel freely and retrieve some gear I left in the route. This is when he disappeared for a bit and I waited, David Blaine style, perched on a sloping triangle of rock the size of a shoebox, attached to the wall by two Batman style camming devices. It was hot. I was ready to be done with rock climbing. The cool river and a well-earned cold beer were on my mind.

He did return eventually, and we regrouped to the safety of the Sentry ledge prepared to end this adventure and get on with the day.

Instead, we were right where we began, pulling and pulling on the rope that just didn’t want to come down. Mystery leaned his head into the rock, arms dangling at his side. I knew he was spent. The only heavy lifting I had done involved hauling myself up the rock, while he had been up three times and down twice, always on the sharp end of the rope. It didn’t look good, and the cub scouts were already gone.

Oh then did we pull! Spitting, whimpering, groaning, feet scrambling to keep every inch gained, until finally it began to run freely and then tumbled down to us. 100 meters of victory lay in a snarl at our feet. The two ropes had rolled together during the rappel and braided themselves into a tight twist. This was the cause of our suffering.

We rapped down to the base, settling yet another open account with Looking Glass mountain.

7 Responses to The Rock