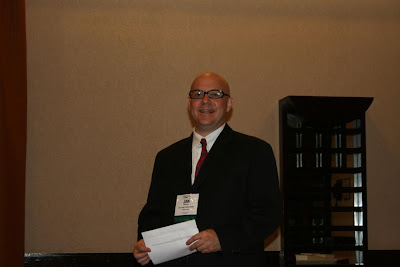 Dig it, Elton John shaved his head and came to my conference last week. He’s so cool. No, that is me of course, doing my level best to impersonate a neo-conservative and hopefully failing. Somebody should have straightened my tie and helped a brother out. I post this not from vanity or to invite dissection of the image, but as a prelude to a brief meditation on sacrifice and pain. My feet hurt terribly in this picture and yet I smile.

I am convalescing at momma’s house this weekend after working 72 hours last week dressed like someone I would personally avoid on the street. I signed on for a 2.5 hour “Detox Yoga” session this morning that was a lot like any other yoga session except with more enhanced interrogation postures and it was 150 minutes long. It did the trick though, since I followed it with a nap of equal length. I almost have the strength to return to Tallahassee.

I woke to the alarm at 6:00 A:M this morning to register myself and Tommy for the Tour de Felasco. The site was not working and I went back to sleep after sending a colorful email to the organizer. I slept deeply, free of the burden yet noble in my intention. What could I do? I tried.

After dozing another hour I woke again to find a kind reply with instructions for registering and moments later the act was accomplished. January 14 at 8:30 A:M we will be in this grey and barren field, surrounded by white people in lycra driving SUV’s and rubbing lanolin into their ass cracks.

It will be too early, too cold, too far, too regulated, too crowded, and too expensive. These are generally acknowledged as facts. Still, it will be done.

Sound off if you are in!

10 Responses to Pain and Suffering