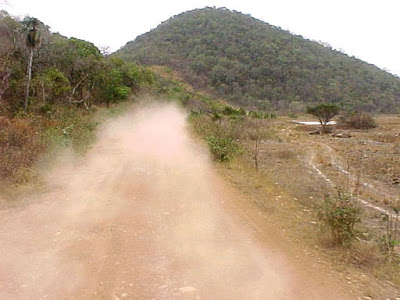 Just as 30 riders began to roll onto the trail, Mystery reached down and pulled the stem out of his valve, letting all of the air out of his front tire in one big whoosh. He told me then that I should go on without him, but I hung back to help correct the problem. We caught the group at the top of the first hill and riders were charging, ambling, and weaving into a line from fastest to slowest and I immediately cut the corner, elbowed a woman into a tree, and began sucking up the dust of the crowd ahead of me. Welcome to Munson on Monday nights. I rode through the briars and I rode through the brambles, and I rode through the bushes where a rabbit couldn’t go. I caught a glimpse of Mystery behind me a couple of places when we crossed the power lines and I figured this is where we would make our move.

The dirt was so thick on my glasses I could only see through two thumb smudges I cleared with my own spit, but I could see a jersey ahead of me and I just chased it. Eventually I was all alone. I caught everyone I could catch and that would be the end of the fun. The game now became not getting caught, and I wheezed through the trees with the desperation of a hunted animal. Mystery? He turned for home long before.

Big Worm and I tried to track him in the truck, expecting to find him walking with another flat. I got to hear about Worm’s vaccination schedule and his duties in the Tour of Rwanda, where he will be working for Team Type 1 as a mechanic.

I bet there will be some dust in Africa

One Response to Take a pass