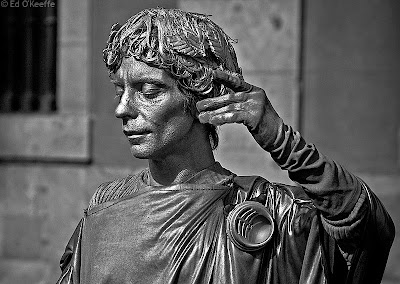 How can you get so damn tired from doing nothing? I spent the first three hours of the morning sitting in a room full of state office workers. They were sitting in the near dark (budget cuts) watching another state office worker read to them from a PowerPoint presentation. The room was simultaneously a little too warm and a little too cold. Being a private contractor I snapped out of it and escaped when they briefly opened the airlock to the outside world to allow for a mandatory smoke break. Some of them just sat staring at the slide that said “MANDATORY SMOKE BREAK” and continued taking notes. I looked at the 4.25 x 5.5 tablets (budget cuts) to the left and right of me and read “MANDATORY SMOKE BREAK” in the hollow penmanship of the saddle-broke.

The rest of the day all I could think was that there, but for the grace of God goes me, but the ache never left my sacrum and the chill never left my spine. I suppose it is a skill like any other trade requires. What I saw were hardened poker faces of the terminally secure, but inside they were living wild and daring fantasy lives.

Wilford Brimley with the too-tight pink oxford and the high-water, washed-out Dockers was walking along the Thames with a Derringer in his shoe and a pretty duck of a girl on his arm, easing his way back to a room to pass the day sequestered until the gaming parlors recovered from the beating he gave them.

← My name is Stegosaurus
Honed →