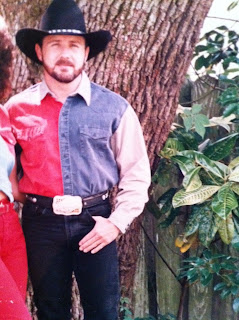 I know this looks like Chuck Norris, but this is actually our good friend and Bikechain posse regular, Big Jim Slade. BJS is a retired professional country & western (both kinds of music!)dancer who has appeared on the hit television show Club Dance on the CMT network. I am going to let this story tell itself, with only the lightest editorial touch.

We have all been in positions in our lives where we were adrift, searching for purpose and meaning, and Big Jim is not unlike the rest of us. During one of these particularly virulent existential episodes in the mid-nineties a friend reached out a hand and pulled Jim up into the saddle, and the rest goes a little something like this…

A coworker, at the time, was into country western dancing. She begged me daily to go to classes with her. I would chuckle and say something like dancing is not my cup of tea. But she was very persistent. I say OK, if I go once will you leave me alone and not ask anymore. She says OK.
Soooooo, I show up at Roosters Colorado Club on a Wednesday night with my coworker. A group of boot stomping, wrangler wearing, cowboy hat sporting redneck wannabees are hanging around the dance floor. In the middle was the hottest looking woman I’ve seen in a long time. Yep, meet the instructor. I think to myself this is an activity I might be able to get behind.

Within a year I’m a boot stomping, wrangler wearing, cowboy hat sporting two stepping, west coast swinging, waltzer who also knows a little boot scootn boogie and watermelon crawl. Within two years I have done exhibitions at the Fair Grounds, taught line dancing at local health clubs and dance studios and yes, made an appearance on the old CMT television show Club Dance in Knoxville, TN.
So how did this end up?

Well I married the instructor then hung up the boots for a pair of Sidi MTB shoes.

Thanks Big Jim for getting us started here.

← Chomping at the Bit
Wrecking Ball →