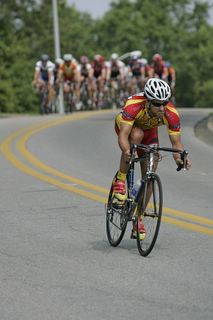 This is a friend of mine competing in the State Road Race in Havana, FL. I know it’s a road bike, and I supposedly don’t care for road bikes or the women who ride them, but I have logged a lot of miles with the Dog Boy so I want to give him his props. 10 months ago I was watching the Tour de France with this guy every day. His leg had more metal componentry than his bike after being hit by a shitty Buick exiting the Interstate. The man called 911 himself, from the middle of the road. He was back on the bike before the last pins and screws were out, and before he could effectively walk. This machine he’s on now is what he got for his troubles. I think it weighs about the same as a peanut butter and jelly sandwich.

So congratulations Dog Boy, I know you made ’em suffer out there.