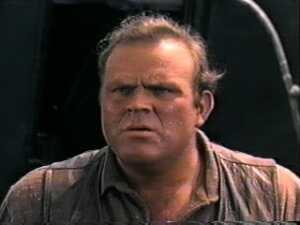 The rasping scrape of the stucco men on the scaffolding outside grew louder as they worked their way towards my open window on the 4th floor of 146 Avenida Sagrada Familia.

Three torsos crowded the windowframe, a familiar lunchtime sight for me.

I had long since given up on righteous indignation and moved towards acceptance. For three months these same men tortured me with the sound of metal on concrete early in the morning, during lunch, or really anytime at all. I hated them.

I had stumbled upon the greatest language comprehension tool ever, The Cartwrights. Predictable at every plot twist, and the vocabulary limited to talk of cows, food, guns and weather, I could keep up. I was making serious progress. That rolling guitar lick which calls us to the Ponderosa -in the Lake Tahoe prairieland- was as much a part of the Barcelona soundscape for me as scooters and jackhammers.

The stucco guys and I made peace. Every day at 11:30 they would lower the scaffolding down to my window, climb through, (making perfunctory gestures of brushing themselves off, and kicking loose the dust that covered everything in my place) and settle in beside me on the couch to watch a 1/2 hour of Pa, Hop Sing, Little Joe, that dark and shifty Adam, and my favorite son, Hoss Cartwright. Between the stucco guys and Hoss, I learned to comprehend spoken Spanish.

This relationship never once veered outside the realm of a single 1/2 hour episode of Bonanza. I did not become friends with the stucco guys. We did not go out for beers. We sat, four in a row on the couch, and watched T.V. every single week, Monday to Friday. When the show was over, and the Cartwrights had: thwarted the rustlers, helped prove an old mine claim for a hard working man, fallen in love in a star-crossed affair, and laughed deep from their strong western bellies, the stucco guys would exit the way they came in, through the 4th floor window. They resumed scraping. I resumed hating. It was a unique situation, similar to the WWII soldiers at Bastogne, who came out of their bunkers on Christmas night to share bites of chocolate and sing carols-before returning to the business of murder the next morning.

← Get it while it’s hot
What the Manatee knows- →

2 Responses to Clydesdale Hall of Fame