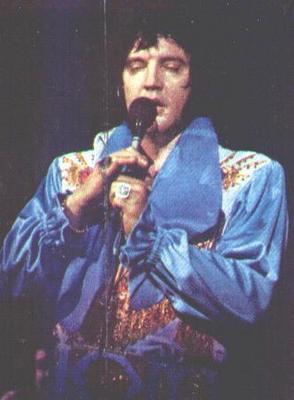 Go ahead and get your fat jokes out of the way. Tell me the one again about how he died on the crapper. Maybe you want to blather on about how he stole the black man’s music? Sure there were sleeping pills, bennies, black beauties, white crosses, marijuana (for his glaucoma) bourbon, and fried peanut butter and banana sandwiches. After all of the tired cliches about the King have been drug around the block, you have to face the facts.

Elvis’ voice was better the year he died than it ever was before. Forget the young vs. old debate, old Elvis clearly rocked harder-scars and all. He loved his mama, Jesus, and Bruce Lee. He was deputized by Richard Nixon. He once karate kicked a violent, charging fan off the stage in Madison Square Gardens (1968).

In 1991 I stood in line with tens of thousands of fans from around the world in a candlelight vigil through Graceland. I met them all, Biker Elvis. Gay Elvis. Gay, Japanese, biker Elvis, you name it. That crowd was pure Elvis love, and it rocked me.

So hats off to Elvis Aaron Presley, the kid from Tupelo, who could sing pretty good, a great enemy of moderation.

If I can dream- Juancho