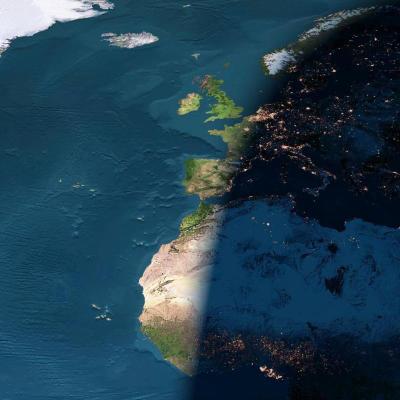 I was in the Steen Mountains, 60 miles south of Burns, Oregon, which is nowhere. My head and chin were shaggy, and I had not changed out of my overalls in 6 days. I had no intention of ever taking them off. Everything we had smelled like sweaty dudes and sagebrush.

My life in Portland was already fading away from me physically and mentally, and my new life in Tallahassee was nearly 3,000 miles away. Todd and I rode up onto a ridgeline overlooking the Alvord Desert and it appeared to be the true edge of the Earth. I remember thinking that I would never stand in that place again. I was excited about my next life in Tallahassee, although it did not have much shape in my mind at the time. Something about being poor and protesting genocide, that was the main point. I watched an ultralight aircraft whir across the desert below, a lone dragonfly on patrol.

The Barcelona bus station, crowded, noisy, and full of diesel smoke. Tired from staying up all night playing guitar, drinking Cava, and eating roast pork with my Catalan friends, I fell into a window seat. I was headed to Milan, then further east. I waved goodbye as the bus pulled out, thinking I would never see Jordi, Robert, or crazy Lamberto ever again. They told me many times they were not interested in ever leaving the beautiful country of Catalonia. Hell, they had never even been to Madrid (spit!).

They certainly weren’t coming to Sarajevo.

Walking into the white house, and seeing all the fellas for the first time in years rocked me. I had no job, but I knew I was home. The grand ramshackle staircase, the dirty kitchen, the promise of a yard full of football idiots shelling out cash to park. We stayed up late drinking scotch and I remember laughing until I had no more tears and had to fall asleep outside on the porch, as I was bedless.

One of my friends just lost his job, that he had only started last week. It was supposed to be the job that would keep him around for a while. Now, he says, “This town is fighting me” and I know exactly what he means. He looks toward Hawaii, Costa Rica, and other past notches on the travel belt, but I think he would like it just fine if he could stay right here.

I can’t decide if I’m jealous of him, or relieved it isn’t me.