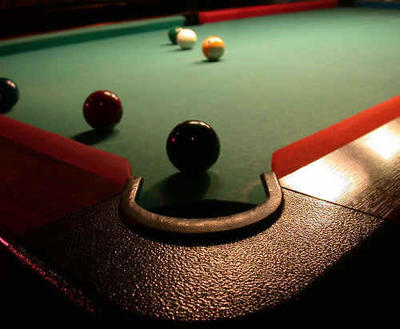 After the 4th consecutive bludgeoning, the other guys physically moved away from us, clustered and muttering. GM and I continued wreaking havoc on their self-esteem as they worked through all possible team combinations in a vain attempt to beat us.

Sometime in the long, late evening S’quatch appeared through the back door, lurking like a gorilla in the mist. His primate sensibilities enable him to track like a cougar. I felt at a distinct disadvantage seeing him out, in the evening on his bike, accumulating more 1/2 speed road miles, while I enjoyed some time, um, off my bike.

No matter, there will be hell to pay on the trail, and the bill is coming to me.

As yet another hangdog pair racked the balls, I harangued them with “I’m quitting after seven just like Lance”. I, personally, found this to be hilarious.

After six in a row, they switched to, “This is boring”.

After notching another 8 ball in the corner pocket I replied, “You’re telling me!”

It was an 8 game sweep, unprecedented.

Have a great weekend, I’ll try to write less sucky on Monday.

4 Responses to Standing over the 8 ball