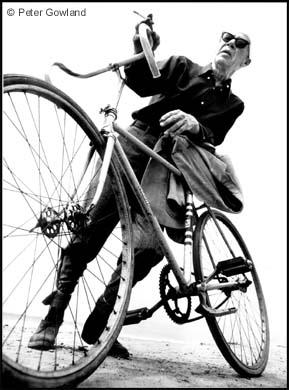 If we are always arriving and departing, it is also true that we are eternally anchored. One’s destination is never a place but rather a new way of looking at things.

For just a minute I stood there with my hand on the Bottechia, thinking maybe I would stick to the neighborhood and spin some crit style laps around the Beautiful Circle. Smooth, wide turns on a 53 tooth chainring, something totally different for a change.

Then I wiped my lipstick off and got on my real bike.

The natural line out of the neighborhood falls right down into the old cemetery at the end of Martin Luther King Jr. drive. A Chevy Blazer with VFW tags sits idling with the windows up, the driver, a lone old man paying his respects from inside, to who?

A young guy, I recognize him from the coffee shops, rides ahead of me with his dog, burnished red and shaggy, on a leash. The dog pulls up to catch a scent and dude makes a lurching bail save with a swing of his leg over the bars. Down he goes, but no harm done.

Onto campus and the run I have ridden 100 times or more. Start at the fountain, into the corner drop over the manhole cover, if you hit it right the world falls beneath you then catches you again in the secure palm of her hand. Up and over, through the hedge, squeeze between the bench and the emergency rape prevention phone, down again, carve it back deep to get under the Magnolia and hit the little hip jump that spits you out towards the business school.

Stairs, sets of three, four, eight, and twelve, whatever you want. Just sit back and hold lightly, stay off the front brake. still I can feel it in my wrists like I never did before.

A flash of yellow and red. Its a dude on a fixed gear, with a big messenger bag. A poser, but one with good taste, maybe poser is not the right word, his look is so 1979 NYC messenger he is more like a tribute band to the old school (older than me school anyway). Of course I run him down . He marks me as I get within 50 feet and he stands up and goes. He’s got no gears so there are no surprise moves, just pushing pedals as hard as we can. I imagine it is like fighting with axes vs. swords. I get on his wheel, but I can’t visit long, “So nice to make your acquaintance, I have to go push my aorta back down my throat, very well then!”

Sorority Rush- Ponies prancing, makeup melting in the heat, hoping to be accepted, have your life all spelled out before it gets going. Still, some pretty fine young ladies out and about this time of year. I may be grouchy, but I ain’t crazy.

1997 Jamis Durango, rusty color, white rock shox, no mistaking it, my brother’s old bike. It isn’t the one that was stolen, but the recent trade-in. It now belongs to Katie, wide-eyed and brand new to town. She said she already took it to Munroe trails. I assume she means Munson Hills. Great, she will probably be passing me out there in another month, on a bike I helped rebuild. She paid $250, which is sweet because that more than covers my brother’s balance on the new ride. she asks me what the bike was worth when it was new. I told her adjusting for inflation, probably $500, which would be like a $900 bike today. I have no idea what any of that means, but she likes it. I want her to be happy. she tells me to tell the guys at the shop she’s taking good care of it. This will no doubt spur a run of the most vulgar sort of comments before everyone retires to the shop porch for a smoke and more lewdness.

Time to go clean up for poker night, and the hill climb up through Frenchtown, the historically black neighborhood, of which I am a proud fringe neighbor. City league football practice is gearing up, it looks like the first day. A man my age, thirties, in a shirt and tie is throwing passes under the 90+ degree sun to pairs of 7-9 year olds. I know he would say it is about respect. I can see by the all eyes on him posture of the line of boys that he gets it. I feel nostalgia sweep through me. I don’t know if it is because I remember what it was like to be him, or if I remember being like the boys, at practice-paying attention and waiting in the heat.

Back up MLK Jr. Time to eat, change, go big or go home.

← Back of the Bus
When the levee breaks →