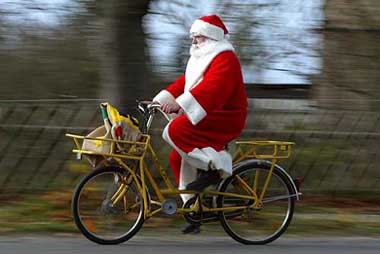 Hang in there kids, Santa’s pedaling as fast as he can. Of course, he got dropped somewhere along the AlCan Highway by his undisciplined and unfocused training partners who have no respect for a sense of propriety or tradition. But still, reaching deep into his red bag of courage, he forges on-poised to launch a brutal solo attack against the collective juggernaut of Donner the “freight train” Blitzen, as led by the young prodigy Rudolph “Red Nose” Reindeer
(So named due to his frequent appearances in the tabloids with the likes of Lindsay Lohan and her gal pals). The So-called “Brown Train” has ruled the road for a number of years, but it looks like Santa “the Lung” Claus will put the final period in that book this weekend.

Let us hope you have all been nice.

2 Responses to He’s on his way!