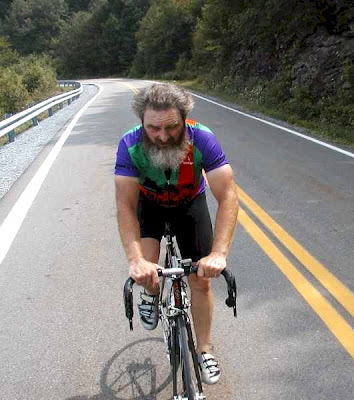 He’s 58 years old and stands 5-6 at best on tiptoes. By his own description he looks like Charles Manson, but he’s more Old Testament prophet eccentric than homicidal hippie crazy. His take on politics and religion will send you scurrying back to the safety of the weather, or asking him to whip up another plate of pancakes and soy sausages as a diversion. Better yet, get him to tell you about his adventures at Paris-Brest-Paris or Boston-Montreal-Boston, or one of his 27(!) assaults on Mount Mitchell.

Here’s to Michael Davis, who runs a corner of road biker heaven called the Bicycle Inn of Bakersville, North Carolina. Show up one afternoon for a three-night stay. He’ll take you on the “Frankie and Charlie” tour of Bakersville, which ends in a screaming descent down the main street of town. Spend the evening on the porch trading war stories with the other guests. After breakfast the next day, let Michael shepherd you around to the Tennessee side of Roan Mountain for a 5-mile climb that starts after he’s already (respectfully) kicked your ass for 45, and mercifully crests with only 8 miles of rollers and downhills back to the Inn. He’ll also snap your picture a mile from the top and make it look like the whole climb was like Sunday afternoon on the St. Mark’s Trail. Day 3 is a tour of the Toe and Cane Rivers, concluding with a fast and scenic run through the farm fields of Jack’s River Road. As Sasquatch learned on our visit in August, Michael will even true your cantankerous rear wheel between rides.

I’d nominate Michael for the Clydesdale Hall of Fame, but substitute blogmaster Sasquatch, at 6-3 and 240 and a snob about the category, says he’s too small. (Come back, Juancho! Sas’ is drunk with power.) So call this a Hitops Profile, like the Dewars ads that used to run in the mags. All that’s missing is Michael’s favorite Scotch: a protein powder shake spiked with ambrotose, which he calls the “best shit in the world.” Oh, and by the way, The Bicycle Inn does NOT take Visa.

3 Responses to The Prophet’s In(n)