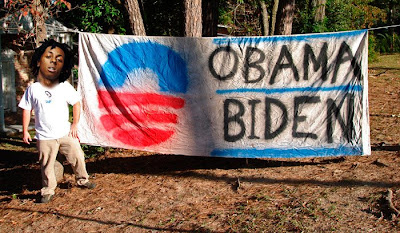 The buzzing sound in my head increased to the pitch of a circular saw by 10:00 A:M so I had to release some pressure. I went downtown and voted.

I walked through downtown Tallahassee past the capitol where I stood screaming my head off in 2000. I remember looking at the crowd at the Recount rally and noticing that we were not a bunch of citizens united, we were a variety of issue-advocacy groups. I felt separate and apart.

I walked out of the court house next to a guy who looked like Lil Wayne and we were both putting our stickers on our shirts. He looked at me and shrugged, ” Well, I guess we find out tomorrow whatever happens.” I pulled out my Obama/Biden button and shook it saying, “I hope to God this happens!” all the while foaming at the mouth with my eyes rolled back in my head.

He broke into a platinum grin and we terrorist-fist-bumped. He said he wished he had a button so of course I gave it to him and we parted. I saw him walking as I drove out of down town and he was sporting his button and his I voted sticker and striding like he was 10 feet tall and bulletproof-which he surely was.

A plane towed a picture of a 10 week old abortion through the skies encouraging you to vote for John McCain. Another plane towed an Obama/Biden banner without any pictures that I could see. Voting helped, but a bad case of the crazies was setting in again.

Now things have come down to what I always knew they would-screaming in the front yard for change in this country. Inkjet, whom you know by other names around here- supplied the drop cloth and I got the spray paint. My brother, code-named Tres joined the fun then we spent a couple hours on the corner with Lil Juan Wayne, pictured above.

Around 700 people honked, cheered, and raised fists, peace signs, and # 1’s while about 10 flipped us off exhibiting some of their fine classy ways.

One man hollered, “You people are out of your Goddamned minds!” to which I would respond, “Oh yes sir, we are most definitely that.”

All are welcome to come by and holler tomorrow. It feels really, really, good.