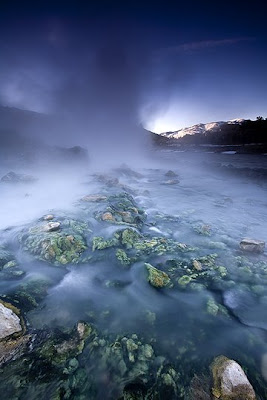 In the pure and golden years I lived in Bozeman, MT the most most pure and golden thing I did was trek over the Bozeman pass on Interstate 90 before dawn in a 1980’s Subaru with 6 people crammed inside. Exiting in Livingston and rolling down through Paradise Valley on the black ice in the dark, all for the glory of watching the sunrise over the Absarokas while sunk to my nose, naked in the Boiling River.

In the coldest months of winter we would rise at 4:30 A:M whenever we had the gas money to go. I am certain that if I lived by that water, and soaked every day, I would live forever. A sunrise trip to the Boiling river was my last official act in Montana before moving to Portland to wear stupid shirts and carry terra cotta around in the rain. 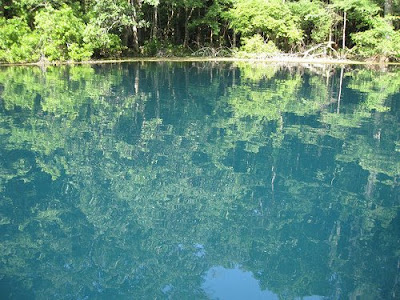 I thought of that time and place while loading my kayak onto the van in the driveway yesterday. The thermometer read 108, which would be a scalding, but ideal soaking temperature if you were in the water surrounded by rocks covered in translucent water ice and the Wapiti grazed on the hillsides above you, scratching at frozen mud for a scrap of grass.

72 degrees is the ideal soaking temperature in this part of the world. Blue Hole is a short paddle down from the Wacissa headwaters. Still sunk to my nose, no longer naked, and watching the sun go down instead of up, I nonetheless feel very close to that steaming river thousands of miles away.

← Sparkle and Boom
A Day of Record →