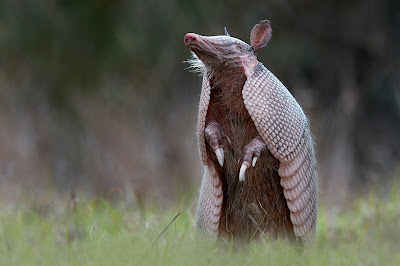 Now I know why I used to write only about riding my bike. It’s because something always happens on a bike ride, so the material just writes itself. Like yesterday, I met my buddy and his 2 year old daughter out at the Pedrick Greenway. The greenway is a gigantic sysytem of pasturey-looking land with interlacing doubletracks to nowhere. The only certain way to navigate the greenway is to stay on the outside and loop the whole 7 miles back to where you start. It’s a pretty ride, with a mix of dirt, turf, and sand. It has some decent sustained climbs to work you over and it is just generally a very tranquil environment. That’s why the ‘dillos like it so much.

My friend was riding with a broken pedal and a two-year old in the bumper seat so that evened our pace out to a happy slow medium. This allowed us to quietly sneak up on two nine-banded armadillos, on two distinct occasions, they were not consorting with one another.

Not very interesting you might say? Should you say that I would reply, how many armadillos did you see yesterday?

That’s what I thought,