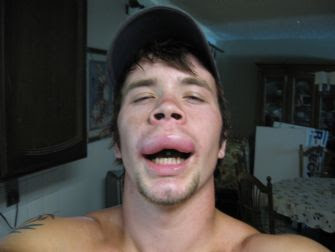 This is not a picture of me, but of another hapless schlub who couldn’t keep his photo off the internet with a big swollen, bee-stung lip. When you hear this expression it is usually a compliment, referring to Angelina Jolie’s perpetual pout. On a man though, not so sexy. The incident occurred at Tom Brown Park while I was handily handling Mystery’s occasional attacks on the trail. As we were swooping down the flow track basin- POW! Right in the kisser. I caught the yellow-jacket in the corner of my mouth and trapped it beneath a bicuspid. Mystery stopped due to the gargling,choking sounds which were different from my normal gargling and choking sounds and with some urgency I spat the Dolichovespula into my gloved hand and crushed it.

I had no choice but to ride on, as we were not well-placed for a bail out from this point. As we rode I could feel my face getting heavier and the intolerable stinging sensation subsided into a deep throb. I took a sip from my water bottle and somehow poured water all down the V of my jersey.

When we stopped riding 15 minutes or so later I asked Mystery to tell me if my lip looked swollen. His response? Instantaneous whooping and laughter. He tried to take a picture with his phone, but lucky for me he is so technically unsavvy he did not realize he was actually holding a patch kit, thereby sparing me the humiliation.

By the time I got home my lip had grown to the size of a boiled hot dog and I had something new to whine about.

← The Serious Road Trip
Yoga is not a Cult →