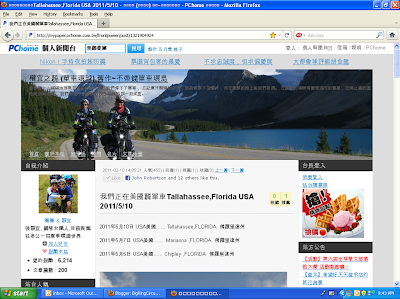 I was leaving the air-conditioned comfort of the gym yesterday when I saw two figures roll by on heavily laden touring bikes. They were covered completely from the sun, so I could not even see their faces. The temperature was close to 100 and they were crawling up the hill in front of the mall. My spirit burst forth from my body in a wash of admiration. I hurried to the corner store and bought two cold bottles of Zephyrhills spring water and then I rushed to the intersection at the top of the hill (Blairstone and the Parkway.) There, as they slowly approached, I began to clap and shout “Allez! Allez!” as they pulled up to the red light. Pulling down their scarves I was greeted by two broad grins.

They were on their way to Miami, from Iowa, by way of Guadalajara. They gave me a photo of themselves, a post-wedding picture? She smiling in a frilly pink dress, he triumphant and lifting her in his arms. They accepted my gift graciously and away they rolled under the hot afternoon sun.

Here is a link to their site, in case you can read Taiwanese.