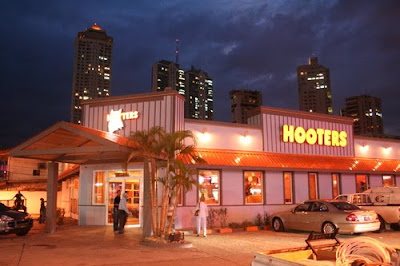 Monday night in the off-season is no time to go to Hooters in Panama City Beach.

Hoping to save some money we flew to California from the new airport on the outskirts of Panama City, FL. I am guessing that was probably not the result, but these stories are priceless so who cares?

We commenced our honeymoon at the well-appointed if downtrodden Paradise Palms Seaside Inn, cozily sequestered for an evening prior to our early departure the next morning. Our room opened onto the gulf beach, and we held hands and watched the sunset. We were not the only ones staying in Paradise, just the only ones without gelatinous front-butts pushing up over string bikini bottoms- or the only ones not chain-smoking generic brand cigarettes and cursing- or the only ones not peeing in the pool. We retreated to the cozy room, which was truthfully not bad at all, and watched as strangers drew hearts and greetings on our dew-covered windows with their influenza-covered fingers.

We strolled out to take the air and find a nibble, only to be turned away at every door by either a closed sign or a Ukrainian hostess, recently trafficked no doubt. “Vee close at 10:00″ she explained as reason for turning us away at 9:15. Her tone closed out the category for discussion.

The neon orange lights of HOOTER’S shone as the only open establishment on the Miracle Mile, Shangri-la of the vaunted Redneck Riviera. I shrugged my shoulders to my beloved, “When in Rome baby?” and she shrugged back.

From the quiet and dark streets to the tense and sweaty atmosphere of beach town refugees paying too much for bad beer is a harsh transition and a manager grinding his teeth chattered at us as we entered the room. Cocaine I whispered to my sweetheart. I think everyone working here is on cocaine. It was probably methamphetamine in retrospect given the obvious price differential and it being the off-season.

We showed ourselves to a table in the back, by a door, with a clear path of egress, and scanned the filthy menu for the item made from the most canned products. A commotion ensued alarmingly close to us, and a toothless hag at a table of eight screamed profanely, A RAT! I JUST SAW A MOTHERFUCKING RAT! RAT, RAT,RAT,RAT, RAT!

By then we had ordered beers, and unwisely chose to remain seated.

THERE IS A GODDAMNED MOTHERFUCKING RAT IN THIS PLACE, RIGHT MOTHERFUCKING THERE! Parents covered gentle ears of children, and I will take a moment to apologize to you, dear readers, for the vulgar assault on your senses. I offer it only as a testimony to the truth.

SOMEBODY IS GOING TO GET ME A FREE MEAL UP IN THIS BITCH I SAW A RAT!

We turned back to our table in time to welcome a suspicious quesadilla to the table, delivered by our waitress who made it clear that she herself had no idea what a quesadilla might look like, or be accompanied by in the way of condiments.

Another commotion ensued immediately behind us and I whirled around prepared to defend my life, my wife, our remaining honor, but it was tooth-grinder in the role of hero this time as he lunged in a giant step and came down with crushing force on a cockroach recently landed from flight. We, the entire patronage, accepted this result as acceptable and definitive and returned to our meals.

We passed on the offer of a second round, paid our substantial tab, and regarded every cent a ransom well paid.

7 Responses to The Miracle Mile