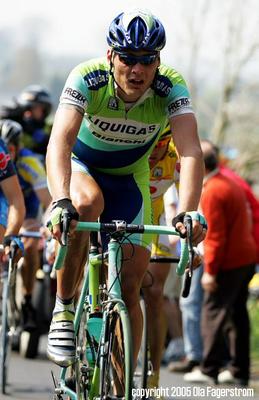 It’s not like I started today thinking about dropping out of the Tour de France. It just turned out that way.
My back started really bothering me after the start. I could never get comfortable on the bike and it was even hard to grip my handlebars there at times. I just couldn’t get any power out. I would try and try and try and there was just nothing. I felt like I had about half the power I did yesterday. I tried smaller gears, bigger gears and nothing. It was one of those days when I could neither spin nor turn gears.
The stage itself kicked off with the usual charge from the line and the attacks started right from the gun. There was a bit of a tailwind, too, so that boosted the speed even more. Even going up the climbs, it seemed like a full-on sprint the whole first hour and I was having a mess of trouble trying to stay on.
Unlike the other day, though, I couldn’t keep fighting back on. At one point I slipped off the back of the field, moved back to a chase group. Over the next 20km, my back kept getting worse and worse and I kept getting dropped by the grupetto. I would get dropped on the hills and reconnect on the downhills, but each time the gap would get a little bigger….
Suddenly, I found myself riding 70km on my own. That’s not fun when your back is killing you and you don’t have any power going to your legs. All in all, it was a pretty shitty day.
I’m really, really disappointed, but what can you do?
So, tomorrow I get on a plane and go home to Wales to my family. My wife and I are expecting our second child in September, so it will be good to be home for a bit. I will spend some time at home and try to get my physical problems sorted out before focusing on training for the Olympics.
I’ll try to keep in touch over the next couple of weeks and let you know how things are progressing.

It was a tough race for the big guy, it took a lot to take him out.

McEwen (Davitamon-Lotto) has discovered where his limits are. He was struck by a stomach bug after his third stage win, at Montpellier last Friday, and began the first of three Pyrenean stages on Saturday wondering if he would survive.
“I hardly slept at all. I spent half the night lying in the foetal position. I thought: ‘how the hell am I gonna get through this?’,” McEwen said.

“But there is always someone who is a bit worse, like Maggie (Magnus Backstedt) who spewed up six times on Saturday and still made the finish.”

(Excerpted from the man himself)

Hitting The Deck Is No Fun!

Today was one of those days that you just put your head down, ride and wait for the finish.It’s not that this stage was so hard, it’s that I suffered so much yesterday that I am still trying to recover.To start, I came down on the descent of the Col de la Madeleine and then spent the rest of the day hurting. I was on my own, just trying to get back on to the grupetto and I locked up my front wheel in a corner and landed on my back.

Two riders were unable to appear at the start of Tuesday’s stage, as both Magnus Backstedt of Liquigas and Gianluca Bortolami of Lampre decided not to continue their race.

You’ll get them next year Magnus! Good race.

← Reverse Hibernation
Go on, get out of here! →

4 Responses to A hero must lay down his sword