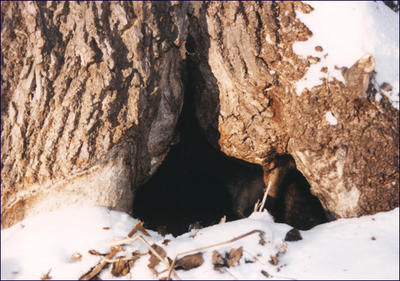 I think I have found the answer to my summer doldrums.

S’quatch, please stop by sometime in October and throw some crackers down this hole. I’m probably going to be hungry when I wake up.

U.S. researchers said they have induced and then reversed hibernation in mice, the first step toward hibernating human patients by slowing their metabolism.
Researchers at the Fred Hutchinson Cancer Research Center said they used oxygen deprivation to trigger the hibernations, which lasted six hours. The mice were revived with no ill effects.
During hibernation, cell activity nearly stops, reducing the need for oxygen. If such a suspended state could be induced in human patients, it could help doctors buy enough time to locate transplant organs for the critically ill or transport wounded soldiers to field hospitals.
Inducing such a state might require only an intravenous saline solution mixed with trace amounts of an agent that interferes with the body’s ability to use oxygen.
“We think this may be a latent ability that all mammals have — potentially even humans — and we’re just harnessing it and turning it on and off, inducing a state of hibernation on demand,” said Mark Roth, the lead investigator.
Oxygen deprivation also could speed the healing of wounds by stopping cell death and keeping transplantable organs fresh longer.

Maybe I’ll get the full organ overhaul while I’m down there.

← Resident: General Delivery
A hero must lay down his sword →