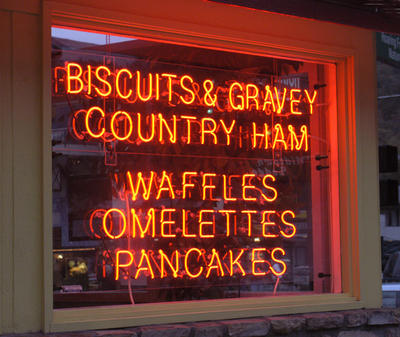 Biscuits and gravy sits atop the heap, above all other breakfast foods. When the weather begins to chill, and the rides grow in length, biscuits and sausage gravy is the best way to start the day. In fact, during the summer, I’m at a loss many mornings as to what to eat before a big ride. Lesser foods like cereal, yoghurt, bagels, whoop-e-di-doo! They just don’t get the job done like a bowl of buttermilk biscuits drowning in a spicy milk gravy. I’ve met a few folks who would try to explain why this is actually not the way you want to eat before a long day of exercise, but these are also the people who consider cycling a “sport” and their body some kind of touchy machine, like an MG, or a space shuttle. Glycogen, lactic threshold, and other modern lies are no more relevant to the truth than phlogiston, or oat bran.

Endurance mountain biking has more in common with lumberjacking, or post hole digging, or riding the rough string down through the Pecos valley than it does with flyfishing, pilates, or any number of other more esoteric concerns. A full belly is what’s needed, if you’re going to survive the day. As for the naysayers, the blood pressure regulators, and the 1 to 4 protein to carbohydrate monitors, I don’t want to hear it. It’s biscuits. It’s gravy. You know what it does and can do. Can you say the same for Red Bull? Power bars? Goo??? (Grown-ups should not eat baby food, it is unseemly, like watching a grown man suck his thumb.)

Now, in a longstanding BigRingCircus tradition, I’m going to ask a question for the majority of you to ignore, and the same loyal crew to dutifully answer because they will hear about it in person if they don’t…What is your performance enhancing drug?

I’m battered and marked up from the LOC trail, which collected it’s blood tax on me yesterday. We saw some familiar faces out there, which is uncommon. I never see anybody out there for the most part. The word must be getting around that it is smooth as Bill Clinton now, thanks to our hard work.

Random and unrelated, but telling quote: Sasquatch to his wife after returning from a ride’ “I really am a road biker!” As if we didn’t know all along. The bidding for his Gary Fisher 29’er will start at $1.00.

Juancho-Out until Thursday because I tour harder than the Rolling Stones.

← Time to Roll Out Again…
I shouldn’t even bother… →