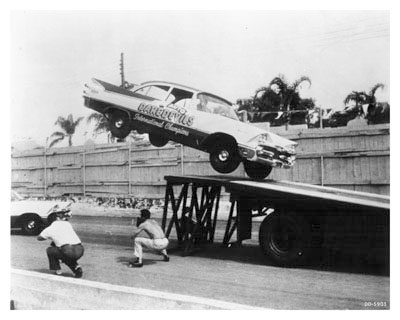 Wow. After the show I saw last night I can only say WOW!

A small crew of us took a ride to campus last night, rolling out of 10th Ave around 9:30. “Shins”, chief mechanic down at Joe’s (www.joesbikeshop.net) had a craving for some urban assault.

Bushy, Hambone, and I started riding the FSU campus at night, for fun, back in the early ’90’s so we figured we could show him a thing or two. Shhhhhhhiiiiiiiiittttt. I don’t think so.

A brief primer: to “huck” is the new lexicon for “jump” or “launch” yourself and your bike into the air, or off of something. Just to make sure we are all on the same page.

Through the graveyard (very dark) Juancho shows off his skills by locking the brakes a split second before hitting a tree.

Up MLK Jr. to the Gazebo on Park.

This is where things got serious. 30 feet of air, out of the gazebo onto the steps below (between the iron handrails mind you). Variations followed. Over the clipped hedge pungy sticks, etc.

Well OK then. Welcome to the X-games. Onward to campus. Hit this, jump that. Jump this, hit that. Swoosh, zoom, boing! Everyone is having a good time.

Top of the hill, Landis Green. Huck Slim is checking out a double flight of stairs, 20 or 30 feet long. A cleaning woman is standing in a doorway at the bottom talking on her cell phone. Calling the police? No. “I want to see y’all do this” she says. Sorry to disappoint her, but there won’t be much y’all involved. Just Huck Slim and his big brass ones. It hasn’t sunk in for me exactly what he intends to do. Ride down them real fast? I can do that. Bunny hop over the edge onto the first flight? I won’t do that. No way.

When I turn around and see him coming in for the approach I realize what he is up to. He is going to jump the entire first flight, and land somewhere down below, being sure to clear his head below the concrete slab protruding down from the ceiling. He launches. An icy chill runs down my spine. He comes up a little short, sparks shower out from his big ring as it drags across the landing. I smell gunpowder.

“OH SHIT!” Says the cleaning woman. “I ain’t NEVER seen nothing like that before!”

Me neither honey, me neither.

Bunny hop the bench onto the slope then drop off the 4 foot wall to the parking lot? No problem.

Ride a one-handed wheelie all the way home? No problem.

Huck Slim I tell you, the guy is amazing. This post isn’t even worthy, in fact it sucks. It should be more daring.

After using the term “cryptozoologist” more than once on this site due to the frequency of encounters with our gentle giant friend, Sasquatch, life will now imitate art. Next Tuesday Ham and I are invited to participate in a radio call in show hosted by the Pangea Institute www.pangeainstitute.us to discuss our sighting. Investigator Scott Marlowe is not convinced of the Jaguarundi theory, and holds out for large panther-like cat. When push comes to shove, Ham and I lean that way too. It will all be discussed on the air. I have no idea what station, or how to listen, but I will see what I can do. First I have to go look for scat and tracks.

You are all invited to that little party. E-mail me if you live here and seriously wish to go looking for cat scat. We could make an afternoon of it! john.phantom309@gmail.com