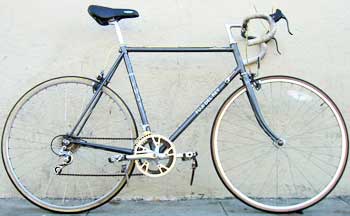 And there you have it folks, the prophecy is fulfilled. I said not one month ago I would accept a road/touring bike into my stable under the following conditions.

I though that I was safe. I didn’t think it could ever happen. To be honest, I have awful luck. Never won a scratch-off ticket, a flip of a coin, or gotten out of a traffic ticket. At the horsetrack I would be better off feeding my money to a horse, rather than throwing it away at the betting window, and yet- fate mocks me.

Sleeping beneath a tarp at Bighorn and Libbyllama’s house in San Diego was a 1986? Fuji Del Rey, previously abandoned at a construction site. I gave it a once over. I sniffed and sneered.

Then I put that bitch in a box and checked it as luggage. Total cost- $0.oo

Now I need to go shopping for some matching pumps.

-Juancho-
gorging at the crow buffet