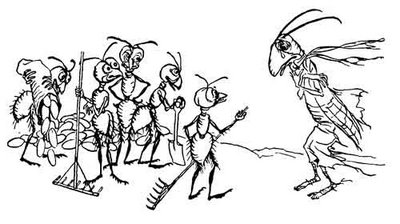 Hard work is great, diligence is admirable, but baby- there is more to life.

After a long, cold winter of miserly chewing on carefully stored goods a little ant emerged into the soft sun of a Spring morning and decided that he was flat out sick and tired of working and hoarding, working and hoarding. It was a beautiful morning and all of his ant friends were busying themselves with repairs to the anthill and the collecting of food for the next winter. “When does it ever end? What is the point of it all?” the little ant asked of himself.

And so he wandered off.

He passed a group of his ant friends dismembering a Rhinoceros Beetle and toting it in pieces back to the larder. He passed another group of ants collecting grains of sand to build a retaining wall, “Hey! Come give us some hands!” they yelled. Little Ant scurried off as though he didn’t hear them.

Little Ant decided to go see if Grasshopper made it through the winter.

Little Ant found Grasshopper sitting in the sun, picking at his electric guitar.

“Hi Grasshopper, how was your winter?”

“Well, I can’t lie to you Little Ant, I got pretty hungry. I got pretty cold.” Grasshopper said, as he picked some heavy Sabbath-style licks. “That was pretty harsh when you all turned me away empty-handed.” He didn’t look up at Little Ant. This made Little Ant feel bad. He had never felt bad before, not even when dismembering Rhinocerous Beetles.

“So what did you do all winter Grasshopper?”

“I got by”, Grasshopper said. “I found some cool Dragonflies to kick it with. They gave me something to eat from time to time and I played my guitar and told stories and drank red wine.”

“So what about you Little Ant?” “How was your winter?”

“It sucked.” Said Little Ant. “All we did was hoard food and talk about the repairs we needed to do to the pile”. “I’m sick of eating Rhinocerous Beetle, that’s for sure”.

“Whoa!” Said Grasshopper, “As long as you don’t get a taste for grasshoppers!”

Some clouds floated by and then the sunshine poured down onto Grasshopper and Little Ant. Grasshopper’s eyes were closed and his head was turned into the sun. He was thumping out a Pixie’s song absent-mindedly and smiling.

← Free Agency Sucks
This Blog is still about Mt. Bikes →

6 Responses to The Grasshopper Gains some High Ground