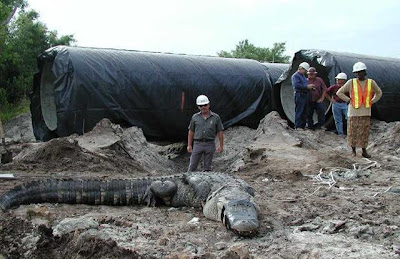 I feel bad. Juancho took my challenge to heart (as he always does, the big lug), went back to the refuge and tried to get a close-up of the biggest gator out there.

A tourist heard the thrashing, and looked over just in time to see his left cycling shoe disappear into the mouth of this behemoth. I got there as soon as I could and took the situation in hand, but it was too late to do anything but tape the monster’s mouth up and pose for the local press. I think Juancho would have wanted it that way. That’s his girlfriend off to the right, wearing his reflective riding vest in remembrance, and his three greedy brothers in the background arguing over who gets his digital camera. He threw his camera clear at the last second, thinking of others even at the horrific end.

So let’s send up a tribute. Here’s to Juancho. Even his death is a seemingly impossible, yet strangely compelling tale.

10 Responses to May He Rest In Pieces