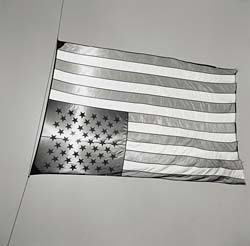 Maybe it was because the holiday fell on a midweek Wednesday, but I just never got that patriotic lift that typically accompanies the 4th yesterday. The Torso and I had a good, long ride up to the North side. Taking 2-3 weeks off the bike turns out to be not so good for your form. I felt like Christ crucified the whole time, but gamely held on without stopping to cry or calling a cab. The golf clubs stayed holstered, true to my word. We grilled out with friends, lit fireworks, but it still just felt like Wednesday to me, not the birthday of the United States of America. I should have rented Saving Private Ryan instead of season 1 of Deadwood. That might have helped.

I know, love it or leave it right? Don’t tempt me.

Luckily, that most American of times is upon us this weekend, Le Tour de France! I can’t wait. I can’t wait to see Phil Ligget, Bob Roll, and even that putz Al Trautwig back on the air ad nauseum breaking down the ins and outs of the course, the contenders, and the drama.

No need to search for inspiration anymore. I will have it beamed directly into the house for the next 30 days.

Now that some time has passed, and tempers have cooled, I must ask; do some of you still really believe Floyd Landis was clean, or framed, or able to generate synthetic testosterone from whiskey? I’m just saying- the suicide of his father-in-law/ best friend, blackmailing Greg Lemond with sex abuse stories from his childhood, the absence of a hearfelt statement like, “I have never taken any performance enhancing drugs, especially not last year” from Floyd.

I think he is about as innocent as Dick Cheney.

If my main man Magnus Backstedt does not enter the race, then I will be supporting the crazed Kazkahkastani Alexander Vinokourov. He wants it bad I tell you, really, really bad. The Americans in the field are just not very inspiring to me this year, except maybe that fella Chris Horner, because he doesn’t stand a chance.

Rooting for Team Discovery has become like rooting for the Lakers or the Yankees. All the talent, all the money, none of the mystique.